Company planned on beginning construction by now on the 1,150-mile pipeline that's designed to carry a half-million barrels of oil a day. 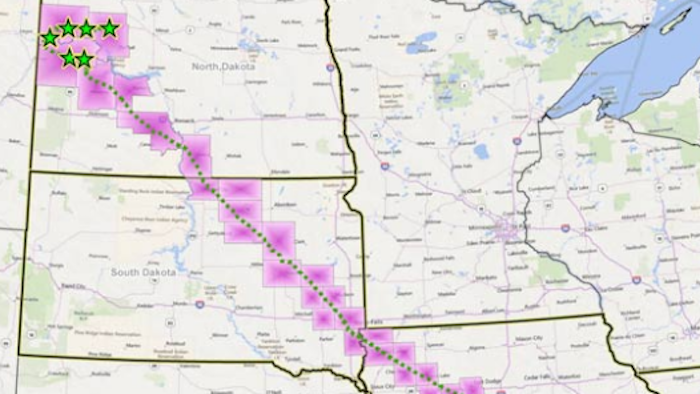 Ed Fallon, director of Bold Iowa, another organization that opposes the pipeline, told The Associated Press that Dakota Access has been very aggressive with landowners and is now "bullying" the Iowa board to give in.

Dakota Access planned on beginning construction by now on the 1,150-mile pipeline that's designed to carry a half-million barrels of oil a day from the Bakken oil fields in northwest North Dakota to a tank storage facility in south-central Illinois. The company told the Iowa Utilities Board in a filing last week it must begin laying pipe by Tuesday to finish before winter and avoid disturbing farmland for a second growing season.

It also has notified regulators in North Dakota that construction would start Sunday and on Monday in South Dakota, and a company spokeswoman confirmed Thursday that construction is set to begin next week in Illinois.

But the Iowa board's approval in March required Dakota Access to obtain all other permits before beginning construction in the state. And the U.S. Army Corps of Engineers, which is responsible for ensuring there's no adverse impact on wildlife and natural resources, hasn't issued any permits and also has been delayed by complaints it hasn't been thorough in its review.

Dakota Access filed a request last week with the Iowa Utilities Board to begin construction on land for which it has landowner approval and for which no federal permits are required. The board has set a Monday deadline for other parties to comment on the request, but hasn't set a date to decide about whether it will allow construction to begin soon.

Environmental group the Sierra Club said in a filing Thursday that the Iowa Utilities Board should stick with its decision to withhold construction approval until all permits are approved because input from other federal agencies may affect the route. And Ed Fallon, director of Bold Iowa, another organization that opposes the pipeline, told The Associated Press that Dakota Access has been very aggressive with landowners and is now "bullying" the Iowa board to give in.

The U.S. Army Corps of Engineers was notified by the federal Interior Department earlier this month that its responsibilities under the federal Endangered Species Act have not been met and further study is required into the project's impact on the endangered Dakota skipper butterfly — an assessment that could take as long as 90 days. The corps also has been threatened with a lawsuit by the North Dakota-based Standing Rock Sioux Tribe, which says the agency must closely assess the impact on the tribe's drinking water and historic sites on its ancestral lands.

"These fundamental concerns have never been rectified," attorneys for the tribe wrote in an April 26 letter. "While corps staff came out to visit the site, these actions took place only after fundamental decisions had been made about the pipeline's routing without consulting the tribe."

A Corps spokeswoman did not immediately respond to a message Thursday.

Dakota Access argues that Iowa has lagged significantly behind other states in its regulatory approval and "each additional day after May 17 pushes additional parcels into a significant risk of being incomplete when weather limits Dakota Access' ability to engage in final restoration work." It said it has negotiated easement agreements with all of the affected landowners in North Dakota and South Dakota, 98 percent in Illinois and 87 percent in Iowa.