The U.S. Army Corps of Engineers has denied a permit for building a $700 million coal export terminal in northwest Washington state. It would be the largest in the nation. 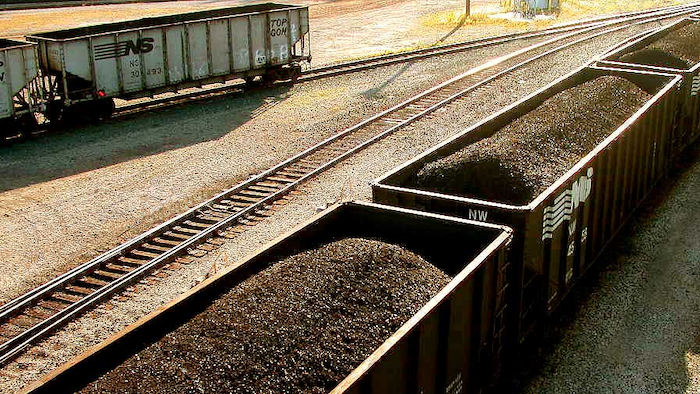 SEATTLE (AP) — The U.S. Army Corps of Engineers on Monday denied a permit to a $700 million project to build the nation's largest coal-export terminal in northwest Washington state.

The agency found the Gateway Pacific Terminal would interfere with the rights of Lummi tribal members to fish in their traditional grounds. Seattle District Commander Col. John Buck said in a statement that after a review, he determined that the project can't be permitted as currently proposed.

The project, a venture between Seattle-based SSA Marine and Cloud Peak Energy, would handle up to 54 million metric tons of dry bulk commodities, mostly coal, at a deep water port at Cherry Point. Coal would be shipped by train from Montana and Wyoming for export to Asia.

The Lummi Nation last year asked the Corps, the federal agency overseeing the permitting process, to deny permits for the project. They argued that tribal members fish in the area, and that the federal government has a legal obligation to protect fishing rights secured in an 1855 treaty. Like many tribes, the Lummi signed a treaty with the U.S. government in which it ceded its land but reserved the right to hunt and fish in "usual and accustomed" areas.

"It's great news for the Lummi, a great win for treaty rights and Indian country," tribal chairman Tim Ballew said in an interview Monday, adding the announcement was met by applause. "The record established, and everybody knew, this project would have negative impacts to treaty fishing rights."

He anticipated that dispute hasn't ended. "Quite possibly there's a long road again of us, but our priority is always to protect Cherry Point," he added. Project developers had asked the corps to find that the project posed less than a minimal impact on the tribe's fishing rights. The company had argued that the most productive fishing for the tribe does not occur near the wharf and that the tribe didn't provide real evidence that they fished a lot in the area.

Last month, project developers asked state and federal regulators to temporarily halt an environmental review that began in 2013, while the Corps heard the Lummi's request. It wasn't immediately clear yet what project developers would do. Reached by email Monday, SSA Marine senior vice president Bob Watters said the company would respond shortly with a statement.

The project has become a lightning rod in the debate over whether the Pacific Northwest should become a gateway for exporting fossil fuels to Asia. Environmental groups strongly oppose the proposal, worried about the greenhouse gases pollutants produced by burning coal and other issues such as increased train and vessel traffic. Meanwhile, some business and labor groups say it will create hundreds of jobs and generate tax revenue.

The proposal would bring up to 487 vessels to a proposed three-berth wharf in an industrial zone about 100 miles north of Seattle. The company says the site presents a unique location, partly because it can accommodate the largest ships in naturally deep water.

The tribe had argued that increased vessel traffic would disrupt fishing practices, as well as expose the region to potential oil spills, boat collisions, pollution and other problems.

Project developers had said they would take measures to avoid or minimize impacts to tribal fishing, including setting up a system to let fisherman know about vessel positions and not allowing tug or tow operations due to tribal concerns about lost fishing gear.