If the new feature takes off, we could all be chatting with artificially intelligent bots to reserve plane tickets, book hotel rooms or order food before long. 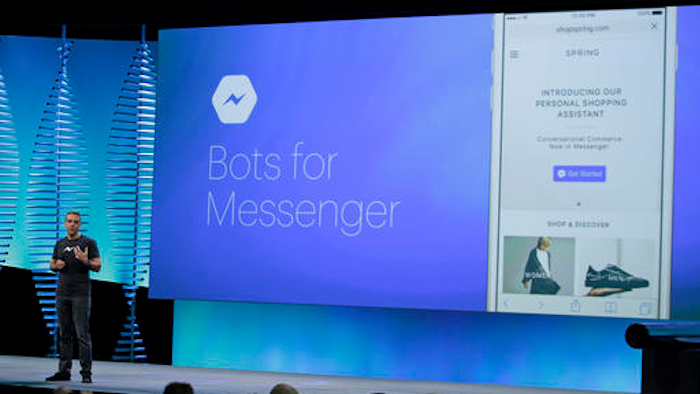 In this April 12, 2016, file photo, David Marcus, Facebook Vice President of Messaging Products, talks about Bots for Messenger during the keynote address at the F8 Facebook Developer Conference in San Francisco. Facebook says people who use its Messenger chat service will soon be able to order flowers, request news articles and talk with businesses by using messaging bots.
AP Photo/Eric Risberg, File

NEW YORK (AP) — It's now possible — though neither easy nor particularly convenient — to buy stuff on Facebook via automated messaging "bots." But it's far from clear that people really want to go shopping on the social network.

Last month, Facebook announced that people can use its Messenger chat service to order flowers, keep up with the news and buy shoes or other goods from participating companies. Only a few have signed on so far, but if the feature takes off, we could all be chatting with artificially intelligent bots to reserve plane tickets, book hotel rooms or order salmon teriyaki before long.

"I would totally shop using message bots for things I know I'm buying" — like soap, shampoo or socks, says Patrick Jones, a software engineer in Washington, D.C. But he doesn't quite see how bots would help with more personal purchases, such as new clothes.

Of course, there are still a lot of ifs around these shopbots, starting with the fact that Facebook has been trying, and largely failing, to launch its own e-commerce efforts for years.

Years ago, there were Facebook stores, a short-lived effort in which a few merchants mostly duplicated their existing e-commerce websites. Then there was Facebook Gifts, shut down in 2014 , which let people buy chocolates or wine— later scaled back to gift cards — and send them to friends.

Facebook also offers the "buy" button, which appears in its ads and aims to let people purchase stuff without leaving the social network. But it's unclear how many people actually use it.

For all Facebook's success at changing the way people interact with one another and expanding their willingness to share personal details in public, it has "struggled with figuring out how to layer on e-commerce," says eMarketer analyst Debra Aho Williamson. Facebook didn't immediately reply to a request for comment.

The company isn't exactly hurting in the meantime. On Wednesday, Facebook Inc. reported earnings of $1.51 billion, almost triple what it pulled in a year earlier. Its revenue jumped 52 percent to $5.38 billion, exceeding analyst expectations of $5.26 billion. Its shares rose 9 percent in after-hours trading.

But can shopbots turn Facebook into a mall? If so, it may still take a while, analysts say.

Artificial intelligence has made big strides recently, but bots are still in no position to replace thinking humans, says Joshua March, CEO of Conversocial, a customer-service software company. Using a bot for general, complicated customer service with existing technology will only lead to frustrated customers. Special-purpose bots — such as existing models that can book you a hotel room or order flowers — are a much better bet, he says.

Of course, bots will get better over time, and consumers will also get used to them, particularly if companies are careful to make clear when people are chatting with bots and not actual humans. "My general thesis is never betting against technology," March says.

It's also possible that Facebook will simply never be a natural place for online shopping, just as Amazon isn't where you go to shoot the breeze with your buddies.

"There is a natural tendency of investors and media to believe that because your eyeballs are there you will shop there," says Wedbush Securities analyst Michael Pachter. "You watch TV, but when was the last time you interacted with your TV to buy something? When I'm on Facebook I am not shopping and when I am watching TV I am not shopping."