The big deterioration reflected the struggles that U.S. companies are having as weakness in major economies overseas and a stronger dollar have sharply reduced export sales.

Martin Crutsinger
In this Thursday, March 3, 2016 photo, container ships are moored to docks at the Port of Oakland in Oakland, Calif. On Thursday, March 17, 2016, the Commerce Department reports on the U.S. current account trade deficit for the 2015 October-December quarter.
AP Photo/Ben Margot

WASHINGTON (AP) — The deficit in the broadest measure of U.S. trade declined slightly in the final three months of 2015, but for the entire year the deficit jumped to the highest level in seven years.

The deficit in the current account narrowed to $125.3 billion in the fourth quarter, down 3.6 percent from a deficit of $129.9 billion in the third quarter, the Commerce Department reported Thursday.

The big deterioration reflected the struggles that U.S. companies are having as weakness in major economies overseas and a stronger dollar have sharply reduced export sales.

The current account is the broadest measure of U.S. trade because it covers not just trade in merchandise but also trade in services such as airline fares and legal fees and also covers investment flows between countries.

The rising trade deficit trimmed overall economic growth by 0.6 percentage point in 2015, a significant reduction for an economy that grew at a modest 2.4 percent last year, as measured by the gross domestic product.

Analysts say trade will act as a drag on growth this year as manufacturers and other exporters including farmers continue to struggle to sell their products abroad.

Trade deficits have become a major topic in this year's presidential race with Republican Donald Trump and Democrat Bernie Sanders both contending that the country has been hurt by the failure of the U.S. government to negotiate trade deals that protect American jobs from being lost to other nations engaged in unfair trading practices.

The increase in the total deficit reflected a 2.4 percent rise in the deficit in merchandise. U.S. goods exports dropped by 7.2 percent, the first annual decline in goods exports since 2009, a year when the global economy was struggling to emerge from a deep recession. 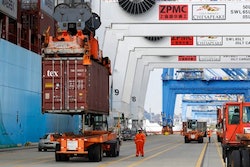