Millennials' unemployment rate has improved to around 8 percent. Add low interest rates and low gas prices to the mix and the car market suddenly looks more enticing to young buyers. 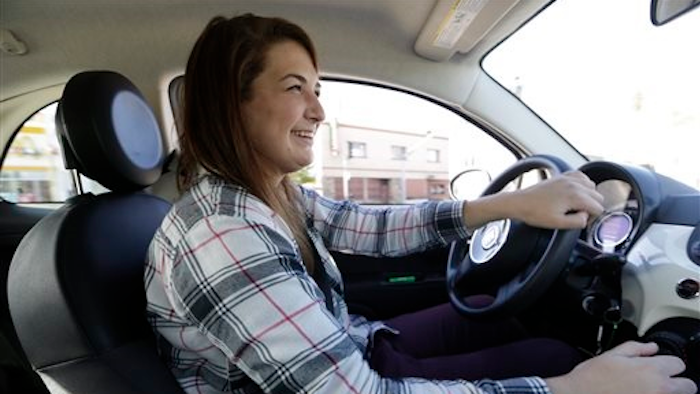 In this Monday, Dec. 21, 2015, photo, Lucy Mueller drives her 2015 Fiat 500 in Los Angeles. Mueller lived in Los Angeles for eight years without a car before she finally bought one in July. Mueller took buses and trains, hitched rides with friends and used ride-sharing services like Lyft. Her commutes lasted more than an hour each way.
AP Photo/Damian Dovarganes

DETROIT (AP) — Millennials were once a source of panic in the auto industry. Dubbed the "go nowhere" generation, they weren't getting driver's licenses, never mind buying cars. Headlines declared it was "The End of Car Culture."

New data suggests at least some of that worry was misplaced. Millennials — especially the oldest ones — are these days buying cars in big numbers. They just had a late start.

Now the largest generation in the U.S., millennials bought 4 million cars and trucks in the U.S. last year, second only to the baby boomers, according to J.D. Power's Power Information Network, which defines millennials as those between 21 and 38 in 2015. Millennials' share of the new car market jumped to 28 percent. In the country's biggest car market, California, millennials outpaced boomers for the first time.

Industry watchers say it's been hard to get a read on millennials because the generation is big and diverse, ranging from recent college graduates to settled-down suburbanites. Automakers were also unsure about the impact of new transportation choices, like ZipCar and Uber, which helped millennials delay car buying. But as they got jobs and started families, millennials headed into car dealerships just like previous generations.

"This whole idea that they're not going to need cars is absolutely ridiculous," said Steven Szakaly, the chief economist for the National Automobile Dealers Association. "The new car buyer age is just happening much later."

It's a very different story from 2010, when millennials — who make up around 30 percent of the population — bought just 17 percent of new cars. Auto executives wondered aloud if the trend would be permanent.

In 2011, a University of Michigan study showed a steady decline in the number of young people getting their driver's licenses. In 1983, the survey found, 87 percent of 19-year-olds had a license. By 2010, that had fallen to 69 percent. Millennials told the study's authors that they were too busy to get licenses and were happy to hitch rides from others.

But there was more to the story. The advent of graduated licensing laws — which make teens practice driving in stages before granting a full license — was one reason millennials were getting their licenses later. An even bigger reason? The economy.

For many millennials, the Great Recession hit just as they were getting their first job or graduating from college. By 2010, millennials' unemployment rate reached 13 percent — four percentage points higher than the national average — according to a report by the White House Council of Economic Advisers. For teens, things were even worse. The teen unemployment rate rose from 15 percent to 26 percent between 2006 and 2012.

Millennials' unemployment rate has improved to around 8 percent. Add low interest rates and low gas prices to the mix and the car market suddenly looks more enticing to young buyers.

Lucy Mueller, 26, lived in Los Angeles for eight years without a car. She took buses and trains, hitched rides with friends and used ride-sharing services like Lyft. Her commutes lasted more than an hour each way. Finally, last July, she bought a slightly used 2015 Fiat 500.

"Now that I have a car, it's almost bewildering to me. I feel like a grown-up," said Mueller, a project manager and video producer for financial software maker Intuit.

Several things kept Mueller out of the car market. She didn't have a credit card until a year ago; without any credit history, financing a car would have been difficult. Also, like many recession-weary millennials, Mueller wanted to avoid accruing debt, so she saved enough for a substantial down payment.

Szakaly says it will take millennials another four to five years to match the spending power of boomers. According to government data, the median household income for people ages 25-34 is $54,243. For those ages 55-64, it's more than $60,000. In addition, the average 25-year-old has more than $20,000 in student debt, according to Goldman Sachs. That's enough to buy a new Kia Optima sedan.

Bret Hyde, a cameraman with Access Hollywood in New York, waited until he was 37 to buy his first car. He and his wife used to rent ZipCars or take buses to visit friends and family. It was tiresome and expensive, he said, but there wasn't much parking in their old neighborhood. After moving to a new neighborhood and renting a garage last spring, the couple bought a 2015 Nissan Rogue SUV.

Sheryl Connelly, a futurist with Ford Motor Co. who studies buying trends, said even as millennials start buying cars in bigger numbers, their attitudes are different than previous generations. Owning a car and getting a driver's license aren't the milestones they once were, and that may be a permanent change.

"The sense of freedom and independence that used to come with getting a vehicle has been arguably displaced by the cellphone," she said.

Automakers have taken note. They're improving in-car technology to make it easier for young drivers to stay connected to their friends and music while they're driving. They're forming partnerships with ride-hailing and car-sharing services and conducting mobility experiments of their own. And they're ditching things that don't appeal to millennials. Toyota Motor Corp. is axing its youth-oriented Scion brand, for example, after finding that millennials prefer the Toyota brand.

"Millennials are going to be the main generation we will cater to as an industry," says John Humphrey, J.D. Power's senior vice president of global automotive operations.