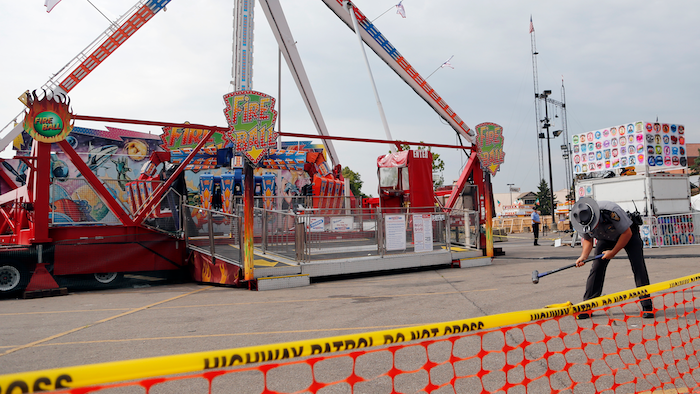 In this July 27, 2017 file photo, an Ohio State Highway Patrol trooper removes a ground spike in front of the Fire Ball ride at the Ohio State Fair, in Columbus, Ohio. Ohio has beefed up its amusement ride inspections four years after the ride broke apart at the 2017 Ohio State Fair and killed a high school student and injured several others. But some ride operators and festival organizers say the state's inspectors are overreaching and shutting down rides over issues that aren't safety-related.
AP Photo/Jay LaPrete, File

Four years after a carnival ride’s corroded steel arm snapped and flung a high school student to his death at the Ohio State Fair, the state is tightening its oversight of amusement rides.

Inspectors are conducting more mandatory checks for rust and metal fatigue and increasingly flagging rides for repairs during the first year of enforcement under the new regulations.

Some carnival operators say inspectors are overreaching and shutting rides over issues that aren’t immediate safety concerns. A few have pulled out of Ohio’s festival circuit or are considering it because of what they say is uncertainty over how the rules are being enforced.

The 2017 accident at Ohio’s showcase fair that killed Tyler Jarrell, an 18-year-old Marine enlistee, and left four others with life-changing injuries sent shudders through the amusement industry.

Attorneys for the victims believe the state's inspectors missed obvious warning signs and also blamed the ride's operator and maker, though no one was charged.

Ohio, like many other states, gives its ride inspectors immunity from negligence lawsuits. But settlements were reached with the ride’s owner and two private inspection companies while another lawsuit against the manufacturer is still in court. 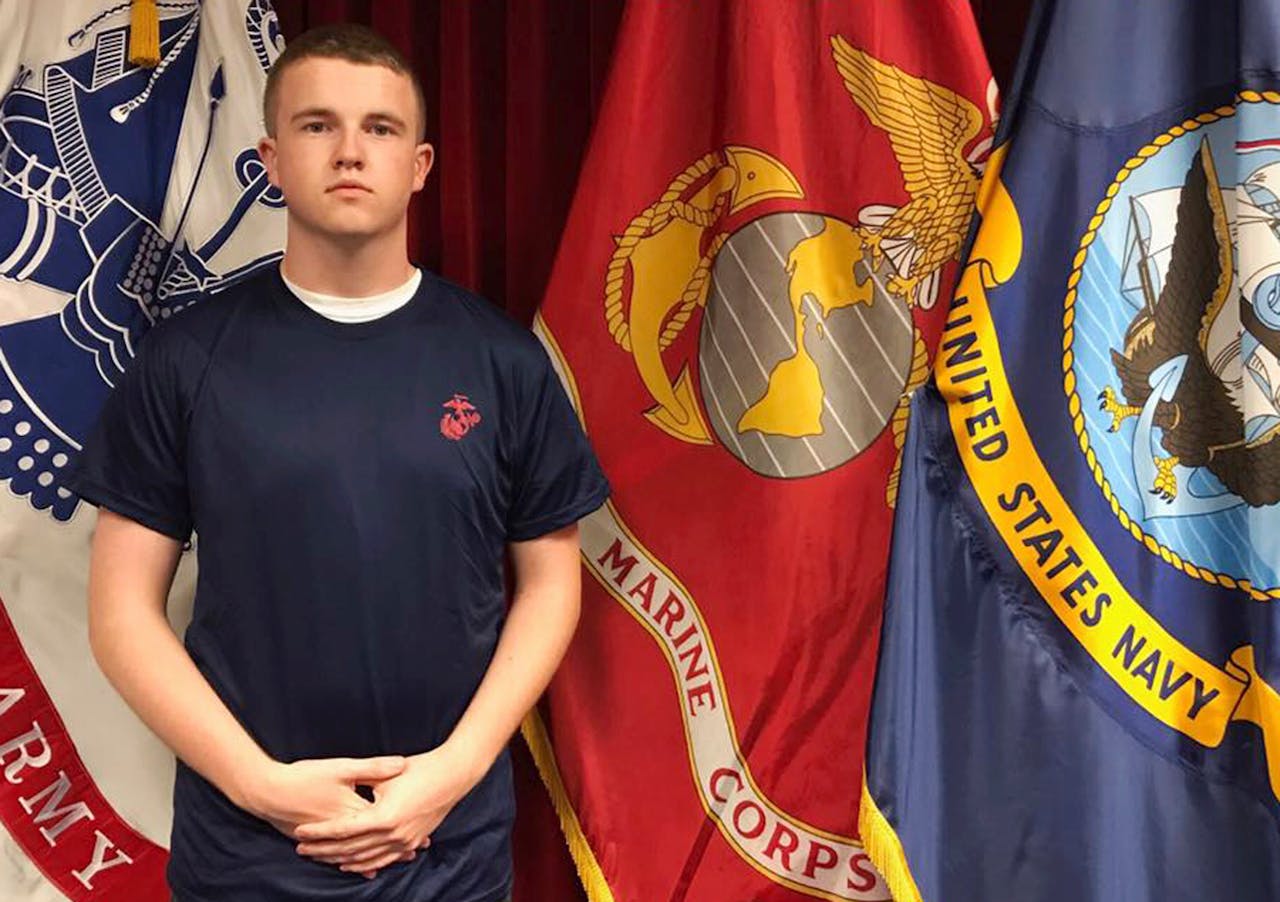 In this undated file photo provided by the U.S. Marine Corps, Tyler Jarrell, 18, poses for a photo. Jarrell was killed in a thrill ride accident at the Ohio State Fair on July 26, 2017, in Columbus, Ohio. Ohio has beefed up its amusement ride inspections four years after the ride broke apart at the 2017 Ohio State Fair and killed Jarrell and injured several others. But some ride operators and festival organizers say the state's inspectors are overreaching and shutting down rides over issues that aren't safety-related.U.S. Marine Corps via AP

“We will have a history that comes with each ride, whether it be a kiddie ride or a roller coaster,” said Dorothy Pelanda, director of Ohio’s Agriculture Department, which oversees ride inspections.

The head of the state’s amusement ride safety office, David Miran, said the law emphasizes checking a ride's structural components and that inspectors are told to err on the side of caution.

Carnival owners also must work with ride manufacturers or a certified engineer when repairs are needed and have them sign off on the work — a process that is more expensive and keeps rides out of commission longer, resulting in lost revenue, their operators say.

“It’s out of the ride owners hands in that scenario, and it’s up to the manufacturer who has the deep knowledge of what that ride is and what the ride needs," said Miran. "Having that other set of eyeballs is huge.”

Because ride owners now are required to make visual inspections before going out on the road, many are making needed modifications before inspectors arrive, Miran said.

Ride owners say they’re all for safety and don’t mind added scrutiny, but some rides have been shut down for things they think don’t compromise safety such as surface rust on handrails and on transport trailers.

Frank Welsh, a member of the Ohio Advisory Council on Amusement Ride Safety, a volunteer board, said some inspectors are probably being a little too picky to protect themselves from being fired or disciplined.

“Take an an older car — you get a little rust on the bumper and it doesn’t mean the car’s unsafe,” he said. “It doesn’t mean you need to have an engineer look at it.”

Eric Bates, who has been in the portable ride business for five decades, said the new law doesn't address what caused the Fire Ball accident — internal corrosion that can only be spotted by ultrasonic testing that measures the steel's thickness.

“By the time we see external rust, it's too late,” said the owner of Bates Brothers Amusement Co.

This year, five of his 18 carnival rides weren't allowed to start at the beginning of the season. A kiddie coaster had to be disassembled and repaired even though it had issues that he didn't think needed immediate attention.

Amusement operators say they especially can’t afford to have their rides grounded for repairs that they don’t believe are warranted coming after a year when they were shut down because of the pandemic.

“I can’t gamble like that,” said Val Gorham, who runs Cromer United Amusements from its base in Eaton, Ohio.

Instead of taking his rides to 26 fairs and festivals around Ohio this summer, he's canceled all of those and filled his calendar with events in neighboring states.

“When I go 15 miles to Indiana or to West Virginia, Georgia, Florida or Kentucky, my equipment’s fine,” he said.

His decision left organizers of the Tusky Days festival in Tuscarawas scrambling to find another ride company. All they could come up with were a few inflatable bounce houses and one kiddie ride.

“We were doing damage control all weekend,” said festival chairman Matt Ritenour. “Having a festival without rides is like having a beer garden without beer. You just can't have it.”

In neighboring Denison, only six of 11 rides were approved to operate during its four-day festival in June because inspectors had “zero tolerance for rust,” said Greg DiDonato, the town's mayor.

“I get that there was a tragedy. I get it, we want safety, but this is a huge overreach,” said DiDonato, a former state lawmaker. “I'm for ride safety, everybody is. But this will kill the small ride operators.”

Small town carnivals and church festivals are most likely to lose out because some out-of-state operators won’t go through getting licensed in Ohio and those that remain will seek out more profitable, bigger events, said Mike Spriggs, president of the Ohio Fairs and Festivals Association.

“If there aren’t changes made to be a little more friendly, I think we’ll continue to see them go by the wayside,” he said about the ride companies. “They're not going to go through that trouble to get licensed in Ohio.”