8 Dead in Hotel Collapse in City in Eastern China

At least 23 people were trapped when then hotel collapsed. 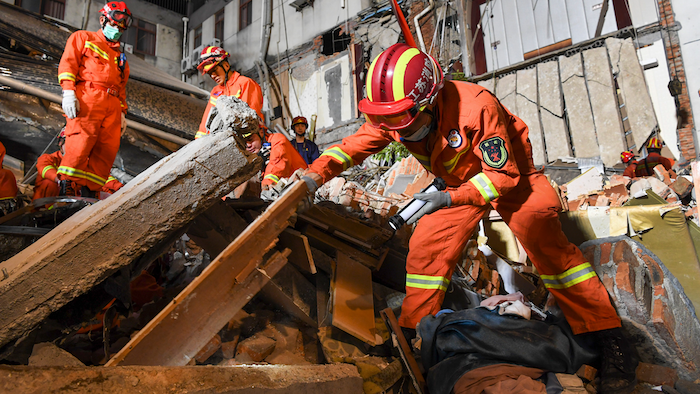 In this photo released by Xinhua News Agency, rescuers search for survivors at a collapsed hotel in Suzhou in eastern China's Jiangsu Province, Monday, July 12, 2021.
Li Bo/Xinhua via AP

BEIJING (AP) — Rescue workers were digging through the remains of a collapsed hotel in eastern China looking for any survivors of a disaster that has killed at least eight people and left nine missing, authorities said Tuesday.

The workers in the city of Suzhou searched through the night, using rescue dogs, cranes, ladders and metal cutters, after the building collapsed Monday afternoon, the city government said in social media posts.

Photos showed orange-suited rescuers with helmets working through the ruins of the building, which had been reduced to girders and rubble. The cause of the collapse is under investigation.

At least 23 people were trapped when then hotel collapsed. Six people were rescued and eight people were confirmed dead, leaving nine people unaccounted for.

Authorities said 18 of those trapped were identified through check-in records, apparently hotel guests. The identities of the other five was unclear.

The 54-room Siji Kaiyuan Hotel opened in 2018, according to Ctrip, a Chinese online booking app.

More than 600 people including earthquake rescue teams and 120 vehicles were mobilized for the operation, the city government said.

Suzhou, a city in Jiangsu province near Shanghai, is a popular tourist destination known for its historic canals and traditional Chinese gardens.