The explosion and fire forced the evacuation of 1,000 residents. 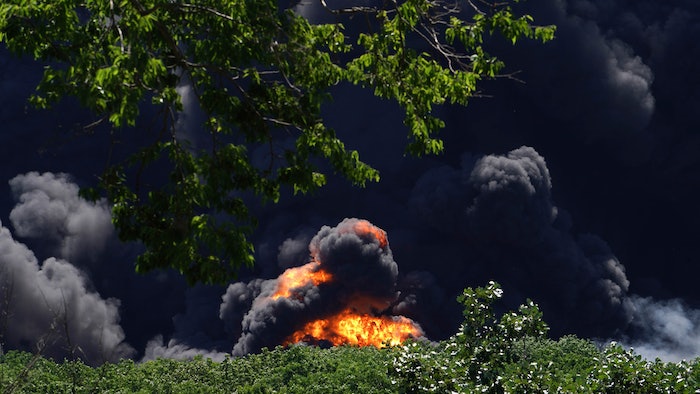 Flames and smoke are seen from an explosion at a chemical plant in Rockton, Ill., Monday, June 14, 2021.
Stacey Wescott/Chicago Tribune via AP

ROCKTON, Ill. (AP) — An industrial firefighting team continued battling a fire Tuesday that has consumed an chemical plant in northern Illinois and forced the evacuation of nearby homes and businesses.

Before pouring fire-fighting foam on the Chemtool plant in Rockton, Louisiana-based U.S. Fire Pumps dug a trench around the facility and installed absorbent booms along the Rock River to prevent residual material from escaping into the village's source of drinking water.

Rockton fire Chief Kirk Wilson said the smoke plume from the fire has dissipated substantially as a result of U.S. Fire Pumps' effort

"This is their forte. This is what they do," Wilson said, adding the company has larger pumps and a larger delivery capability to battle the fire than local fire departments. "At this point in time we have detected no visible runoff into the waterway (that) is just west of Chemtool and to our main waterway.”

Despite the fire being under control, Wilson said the fire is not completely out.

“This is going to continue to burn. When we’re in the overhaul stage and we’re moving debris around, things may flair up,” Wilson said. “But we want to assure the public that it is under control. It is contained in the area of origin in the building where the fire occurred.”

The explosions and resulting fires Monday prompted officials to evacuate an estimated 1,000 residents who lived within a 1-mile (1.6-kilometer) radius of the plant and to urge anyone within 3 miles (4.8 kilometers) to wear masks due to the threat posed by airborne impurities, Wilson said.

He said it was unclear when the evacuation order would be lifted, but asked residents “to stay vigilant."

“We are doing this out of extreme caution. We have come this far in suppressing a very difficult fire with myriad chemicals,” Winnebago County Health Department Administrator Sandra Martell said. “We want to assure our population that they are safe to return to their homes.”

Wilson said once the fires are extinguished, investigators will begin looking into what caused them, he said.

The Chemtool plant in Winnebago County was outfitted with a sprinkler system in 2008, but Wilson said he did not know if that system was still active when the explosion and fires happened.

Bill Snyder, vice president of operations at Lubrizol Corp., the parent company of Chemtool, said he had no information on a possible cause, but that the company would cooperate with authorities. He said it was too early to address the question of whether the plant’s fire suppression may have failed.

Lubrizol Corp. is owned by Warren Buffett’s Berkshire Hathaway conglomerate, based in Nebraska.

More than 80 fire departments have been helping battle the fires, working eight-hour shifts at a time, Wilson said.

Snyder apologized to the local community, particularly those who had to evacuate their homes, noting that the fires had “a very severe impact" on residents.

Alicia Tate-Nadeau, director of Illinois Emergency Management Agency, said state officials are working with the U.S. Environmental Protection Agency and other entities to monitor air quality, as well as making sure no contaminants enter the local water supply.

“This is an ongoing event. We’re not out of this yet,” Tate-Nadeau said.

The Chemtool plant was inspected by a federal agency less than a month before Monday's blast sent debris raining down onto nearby areas, WLS-TV reported. Inspectors from the U.S. Labor Department’s Occupational Health and Safety Administration on May 20 investigated a complaint at the plant.

The station reported that a summary record of that inspection does not explain what was being inspected at the plant. That record states only that the complaint involved safety and health, and the case remains open, the station reported.

OSHA officials said they have six months to complete their investigation at the plant, and no further information will be made public until that work is finished, WLS-TV reported. There are no other outstanding cases or any violations in U.S. records pertaining to the plant.

Chemtool has recorded no U.S. Environmental Protection Agency violations during at least the last three years, the station reported.