The pilot told another Boeing employee in 2016 that the flight system was "egregious" and "running rampant" while he tested it in a flight simulator. 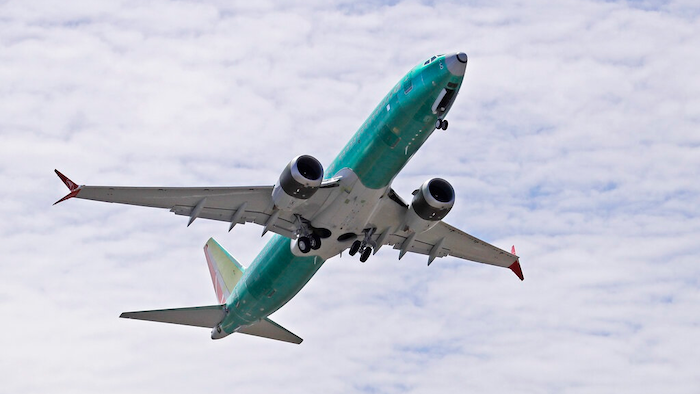 In this May 8, 2019, file photo a Boeing 737 MAX 8 jetliner being built for Turkish Airlines takes off on a test flight in Renton, Wash. Passengers who refuse to fly on a Boeing Max won’t be entitled to compensation if they cancel. However, travel experts think airlines will be very flexible in rebooking passengers of giving them refunds if they’re afraid to fly on a plane that has crashed twice.
AP Photo/Ted S. Warren, File

DALLAS (AP) — A former senior Boeing test pilot told a co-worker that he unknowingly misled safety regulators about problems with a flight-control system that would later be implicated in two deadly crashes of the company's 737 Max.

The pilot, Mark Forkner, told another Boeing employee in 2016 that the flight system, called MCAS, was "egregious" and "running rampant" while he tested it in a flight simulator.

"So I basically lied to the regulators (unknowingly)," wrote Forkner, then Boeing's chief technical pilot for the 737.

The exchange occurred as Boeing was trying to convince the Federal Aviation Administration that MCAS was safe. MCAS was designed at least in part to prevent the Max from stalling in some situations. The FAA certified the plane without fully understanding MCAS, according to a panel of international safety regulators.

Forkner also lobbied FAA to remove mention of MCAS from the operating manual and pilot training for the Max, saying the system would only operate in rare circumstances. FAA allowed Boeing to do so, and most pilots did not know about MCAS until after the first crash, which occurred in October 2018 in Indonesia. The plane was grounded worldwide in March after the second crash, in Ethiopia.

Boeing turned over a transcript of the messages to Congress and the Transportation Department late Thursday, and the reaction was swift and negative.

"We have received hundreds of thousands of pages of documents from Boeing, but not this one. This was intentionally withheld from us, which is absolutely outrageous," House Transportation Committee Chairman Peter DeFazio, D-Ore., said in an interview Friday. He called it a smoking gun of Boeing wrongdoing.

FAA Administrator Stephen Dickson demanded an explanation from Boeing CEO Dennis Muilenburg, including why the company delayed several months before telling FAA about the messages.

"I expect your explanation immediately regarding the content of this document and Boeing's delay in disclosing the document to its safety regulator," Dickson wrote in a terse, three-sentence letter to Muilenburg. In a statement, the FAA said it "finds the substance of the document concerning" and is deciding what action to take in response.

Boeing turned over the transcript to the Justice Department earlier this year but gave it to Congress only this week in anticipation of Muilenburg's scheduled Oct. 30 testimony before DeFazio's committee, according to a person familiar with the matter.

Boeing, in a prepared statement, said the transcript contained the communications of a former employee. Although Boeing didn't identify Forkner, he left last year and joined Southwest Airlines — the biggest operator of the Boeing 737.

Forkner's lawyer, David Gerger, said that Forkner was indicating in messages to a colleague that the flight simulator was not working like the plane.

"If you read the whole chat, it is obvious that there was no 'lie,'" he said. "Mark's career — at Air Force, at FAA, and at Boeing — was about safety. And based on everything he knew, he absolutely thought this plane was safe."

Separate Boeing documents that were disclosed Friday also outlined Forkner's role in communicating with the FAA and removing mention of MCAS from pilot-training requirements for the Max. When the FAA agreed, that helped Boeing sell the Max by holding down the cost airlines would incur to retrain their crews.

In a November 2016 email to an FAA employee whose identity was blacked out, Forkner indicated he was traveling around the world, "jedi-mind tricking regulators into accepting the training that I got accepted by FAA."

The disclosure of the internal Boeing communications comes just a week after international regulators faulted the company for not doing more to keep FAA informed about MCAS, a new automated flight system that was not included in previous versions of the 737.

Before crashes in Indonesia and Ethiopia, MCAS was activated by a single faulty sensor and pushed the nose of each plane down. Pilots were unable to regain control. The idea that a plane could crash because of one bad sensor — with no backup — is emerging as a key criticism of Boeing's design of the Max and FAA's certification of the plane.

"We weren't sure whether to blame FAA or Boeing or a combination" for the so-called single point of failure, DeFazio said. "Things have just tilted very, very heavily in terms of Boeing and deliberate concealment."

Boeing is updating software and computers to tie MCAS to two sensors instead of one, and to make the nose-down command less powerful and easier for pilots to overcome.

Boeing issued a statement Friday afternoon, saying that its CEO had called FAA Administrator Dickson to respond to his concerns. "Mr. Muilenburg assured the Administrator that we are taking every step possible to safely return the MAX to service," the company said.