Investigators found the remnants of the failed elbow pipe, which they said had worn to .012 inches — about half the thickness of a credit card.

Claudia Lauer
In this June 21, 2019 file photo, flames and smoke emerge from the Philadelphia Energy Solutions Refining Complex in Philadelphia. Federal investigators say an aging, failed elbow pipe appears to be the cause of the June fire and subsequent explosions that left five people with minor injuries and destroyed part of the processing unit at the largest oil refinery on the East Coast. The U.S. Chemical Safety and Hazard Investigation Board released a preliminary report Wednesday, Oct. 16 on findings from the June 21 explosion at the Philadelphia Energy Solutions Refining Complex.
AP Photo/Matt Rourke, File

PHILADELPHIA (AP) — An aging, failed elbow pipe that hadn't been inspected in almost 45 years appears to be the initial cause of a June 21 fire and subsequent explosions that injured five people at the largest oil refinery on the East Coast, federal investigators said Wednesday.

The U.S. Chemical and Safety Hazard Investigation Board released a preliminary factual findings report during a news conference that included a timeline and likely initial cause of the fire at the Philadelphia Energy Solutions refining complex. Investigators also said it appeared about 3,200 pounds (1,452 kilograms) of hydrofluoric acid were released into the atmosphere during the explosion, but investigators said they are unaware of any health impacts from that release.

Investigators found the remnants of the failed elbow pipe, which they said had worn to .012 inches — about half the thickness of a credit card — likely contributing to the release of the flammable vapor. The board is continuing its investigation and plans to release a final report with an official cause and recommendations, agency investigators said.

After the elbow pipe failed around 4 a.m., a cloud of flammable vapor ignited. Investigators said there were three explosions that followed including the last explosion of a surge drum around 4:22 a.m. that sent three large chunks of debris that is estimated to weigh up to 19 tons (17 metric tons).

Company officials said the explosions caused severe damage to the 150-year-old site, the largest oil refinery on the East Coast, which had been processing 335,000 barrels of crude oil daily into gasoline, jet fuel, propane, home heating oil and other products. The damage caused the company to shutter the refinery, declare bankruptcy and start laying off workers in August.

The five workers injured in the fire received treatment on scene for minor injuries.

"This didn't need to happen," said board interim executive Kristen Kulinowski. She said the piping that failed "had not been inspected for corrosion in the last 45 years."

The report noted that both the 2012 Chevron Richmond refinery fire in California and the 2009 Silver Eagle refinery fire in Utah were similarly caused by ruptured pipes that had thinned due to corrosion.

Kulinowski said one of the frustrating parts about working with the board is seeing the same kinds of incidents happening repeatedly because companies don't learn from incidents that happen at other plants.

"We're concerned the next time there is a massive explosion and debris is strewn we will not be so lucky," she said, noting that in the three similar incidents, the tanks that hold the highest concentration of dangerous hydrofluoric acid were not ruptured by the debris and no one was killed.

Hydrofluoric acid is one of the most dangerous chemicals in use. Refineries use it to create high-octane fuel. Officials had previously said they didn't believe any of the highly harmful acid had been released and air monitoring around the facility after the explosion did not show elevated levels. If the gas had formed a vapor cloud it could have quickly traveled over miles and potentially affected more than a million people.

The Philadelphia facility had installed monitoring stations throughout the piping to measure the thickness of the pipes and keep track of the metal loss due to corrosion. But investigators said a monitoring location was not set up at the specific elbow joint that likely ruptured. The most recent measurements from the adjacent sites did not indicate thin pipes, they said.

The failed pipe, along with another nearby elbow pipe, had been stamped with letters indicating they likely were part of an installation from about 1973. The report says the industry standard and regulations for the chemical composition of pipes used in refineries has been updated periodically since then. The failed pipe contained higher levels of copper and nickel than current standards require as a limit.

The report also notes that Philadelphia Energy Solutions hired a company to neutralize the hydrofluoric acid contained in areas of the refinery, which was completed at the end of August.

The final report is expected early in 2020, and Kulinowski said she expects it will contain recommendations addressing 100% inspections of facilities as well as whether hydrofluoric acid should continue to be used in the refining process. 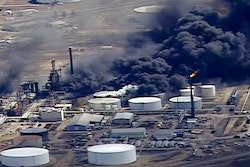 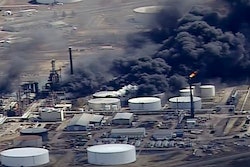 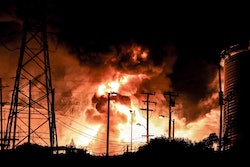