The EPA outlined a series of alleged deficiencies in California's compliance with federal clean water laws. 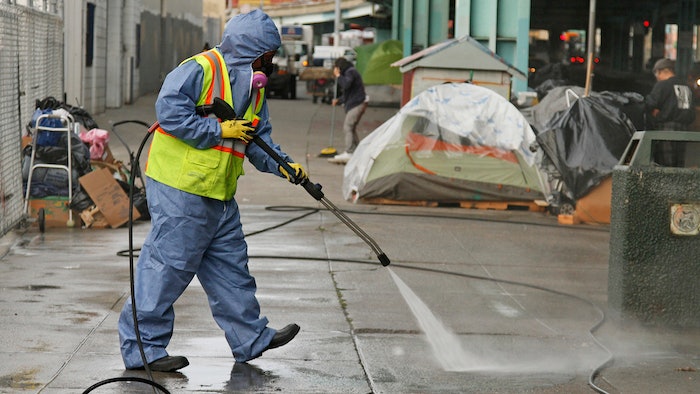 In this file photo, a city worker uses a power washer to clean the sidewalk by a tent city along Division Street in San Francisco..
AP Photo/Eric Risberg

Escalating its fight with California, the Trump administration accused the state of failing to stop water pollution from such sources as human waste left on the pavement by the homeless in big cities such as San Francisco and Los Angeles.San Francisco's mayor disputed any connection between homeless people and water quality, and she and others accused President Donald Trump of using the Environmental Protection Agency to punish the heavily Democratic state.

EPA Administrator Andrew Wheeler outlined a series of alleged deficiencies in California's compliance with federal clean water laws in a letter to Democratic Gov. Gavin Newsom and demanded a detailed plan for fixing the problems within 30 days. "If California does not step up to its delegated responsibilities, then EPA will be forced to take action," Wheeler said in statement.

He did not say how the agency might discipline the state, although options could include withholding funds or revoking California's authority to administer federal laws such as the Clean Water Act. The latter would seem highly unlikely because EPA would have to assume the expense of running the programs itself. The letter was the latest salvo in a feud between the administration and California, which has filed more than 50 lawsuits opposing Trump initiatives on the environment, immigration and health care.

Last week, Trump warned that San Francisco would receive a violation notice for allegedly letting needles and other waste go through storm drains into the Pacific Ocean, an allegation Mayor London Breed denied. "I'm sick of this president taking swipes at our city for no reason other than politics," Breed said Thursday. "There are no needles washing out to the Bay or ocean from our sewer system, and there is no relationship between homelessness and water quality in San Francisco. It's just not a real issue."

Nathan Click, a spokesman for the governor, said: "This is not about clean air, clean water or helping our state with homelessness. This is political retribution against California, plain and simple." In his letter, Wheeler said urban homelessness is taking a toll on the environment, citing news reports of "piles of human feces" on streets and sidewalks.

"The EPA is concerned about the potential water quality impacts from pathogens and other contaminants from untreated human waste entering nearby waters," he said. "San Francisco, Los Angeles and the state do not appear to be acting with urgency to mitigate the risks to human health and the environment that may result from the homelessness crisis."

Wheeler's letter described human waste from homeless populations as "a recognized source of bacteria in water bodies." It referred to a 2014 study for the American Society of Civil Engineers that listed homeless encampments among numerous points of origin for fecal bacteria water pollution in some locations, along with portable toilets, pets and wildlife.

But homeless people would be an extremely minor source compared to overflows from municipal sewage plants and failing septic systems, said Betsy Southerland, a former director of EPA's Office of Science and Technology. Wheeler called on San Francisco to invest billions of dollars to upgrade its sewage treatment system and stop releasing inadequately treated waste into San Francisco Bay and the Pacific, a practice he said state regulators have long allowed.

Michael Carlin, deputy general manager of the San Francisco Public Utilities Commission, says the city uses a combined sewer system that takes raw sewage and storm water to treatment plants before being discharged into the bay. It is upgrading its aging sewer system, he said. "We never, ever drop untreated sewage into the Bay or ocean," Carlin said.

Wheeler also said an EPA review uncovered problems with California's handling of other federal clean water programs, including 23 significant discharges of pollutants in recent months that exceeded permit limits. The investigation also found that the state had 202 community water systems that exceeded federal standards for the presence of contaminants such as arsenic and lead, putting nearly 800,000 people at risk, Wheeler said.

Eric Schaeffer, director of the Environmental Integrity Project and a former head of civil enforcement at EPA, accused the president and Wheeler of using the agency to retaliate against enemies. "It makes no sense to decide that homeless encampments are a major priority for Clean Water Act enforcement, when EPA has done so little to enforce illegal discharges from much larger sources across the U.S.," Schaeffer said.

Earlier this week, the EPA chief criticized the California Air Resources Board for a backlog of pending regulations intended to reduce smog. State officials blamed delays by Washington in approving the plans.