NTSB: Tesla on Autopilot When it Hit Firetruck 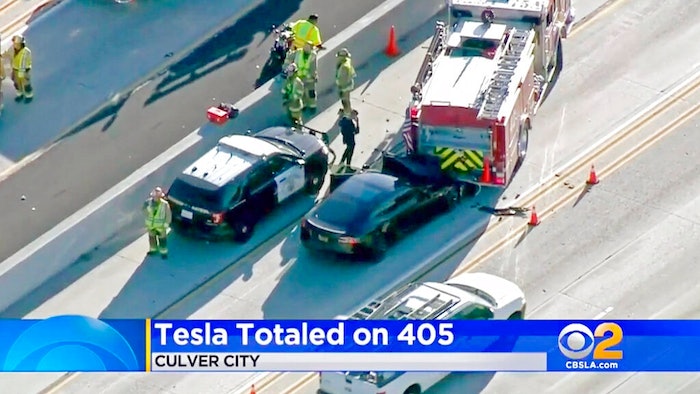 This Jan. 22, 2018, file still frame from video provided by KCBS-TV shows a Tesla Model S electric car that has crashed into a fire engine on Interstate 405 in Culver City, Calif. A government report says the driver of the Tesla that slammed into a firetruck was using the car’s Autopilot system when a vehicle in front of him suddenly changed lanes and he didn’t have time to react. The National Transportation Safety Board said Tuesday, Sept. 3, 2019, that the driver never saw the parked firetruck and didn’t brake.
KCBS-TV via AP, File

DETROIT (AP) — A government report says the driver of a Tesla that slammed into a firetruck near Los Angeles last year was using the car's Autopilot system when a vehicle in front of him suddenly changed lanes and he didn't have time to react.

The report raises further questions about the effectiveness of Tesla's system, which was in operation before several other crashes including two fatalities in Florida and one in Silicon Valley. Tesla warns drivers that the system is not fully autonomous and drivers must be ready to intervene.

The NTSB report didn't state a cause of the crash. The agency will issue a final report Wednesday.

The driver in the Jan. 22, 2018 firetruck crash on Interstate 405 was not hurt. But the NTSB report says he did not have his hands on the steering wheel at the time of the crash.

The firetruck from Culver City, California, had stopped in the northbound high occupancy vehicle lane with its emergency lights flashing as it responded to another crash. The firefighters were also uninjured.

The Tesla driver, from suburban Woodland Hills, told the NTSB that he was traveling to work in Los Angeles when the crash happened. He told investigators he was looking forward with his hand rested on his knee while touching the bottom of the steering wheel.

Just before the crash, a large vehicle, an SUV or pickup truck, changed lanes in front of him, the driver told the NTSB.

"Although the driver stated that he was looking forward, he was unable to see the firetruck in time enough to avoid the crash. The driver had coffee and a bagel at the time, but he wasn't sure if either was in his hand when the crash occurred," according to the report.

Cellphone data showed the driver was not using his phone to talk or text in the minutes leading up to the crash.

A statement from a driver in a nearby vehicle provided by Tesla said the driver appeared to be looking down at a cellphone or other device he was holding in his left hand before the crash.

The NTSB determined in September 2017 that design limitations of the Tesla Model S Autopilot played a major role in a May 2016 fatal crash in Florida involving a vehicle operating under Autopilot. But it blamed the crash on an inattentive Tesla driver's overreliance on technology and a truck driver who made a left turn in front of the car.

The California investigation comes as the federal government has few regulations governing autonomous vehicles and driver-assist systems that can drive a car under certain circumstances. The systems can significantly reduce crashes, but computer-driven vehicles also can make mistakes.

Tesla Autopilot Blamed for Another Crash