But he remained coy about circumstances surrounding the incident. 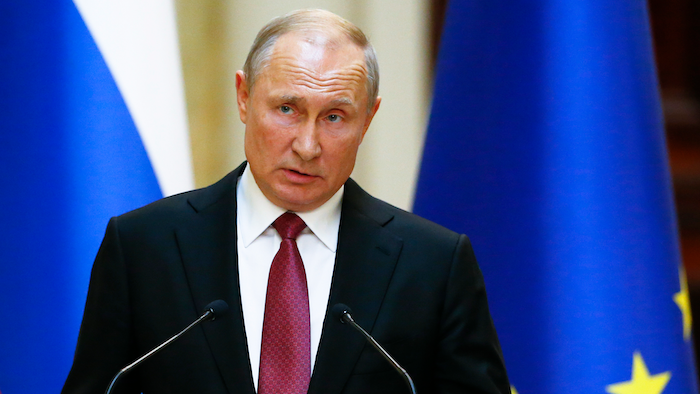 HELSINKI (AP) — Russian President Vladimir Putin insisted Wednesday that a recent deadly explosion at a military testing site in northwestern Russia hasn't posed any radiation threat, but he remained coy about the circumstances of the mysterious incident.

Speaking after talks in Helsinki with Finnish President Sauli Niinisto, Putin emphasized that neighboring nations haven't recorded any spike in radioactivity. "These are the objective data," he said. "These things can be tracked."

The August 8 incident at the Russian navy's range in Nyonoksa on the White Sea killed two servicemen and five nuclear engineers and injured six. It was followed by a brief rise in radiation levels in nearby Severodvinsk, but the authorities insisted the recorded levels didn't pose any danger to local residents.

Russian officials' changing and contradictory accounts of the incident drew comparisons to Soviet attempts to cover up the 1986 explosion and fire at the Chernobyl nuclear power plant in Ukraine, the world's worst nuclear disaster. The Russian Defense Ministry at first denied any radiation leak in the incident even as the authorities in nearby Severodvinsk reported a brief rise in radiation levels and advised residents to stay indoors and close the windows. Frightened residents rushed to buy iodine, which can help reduce risks from exposure to radiation.

Russia's state weather and environmental monitoring agency said the peak radiation reading in Severodvinsk on August 8 was 1.78 microsieverts per hour in just one neighborhood — about 16 times the average. Peak readings in other parts of Severodvinsk varied between 0.45 and 1.33 microsieverts.

The announced peak levels were indeed lower than the cosmic radiation that plane passengers are exposed to on longer flights or doses that patients get during some medical scans.

The Comprehensive Nuclear Test Ban Treaty Organization (CNTBTO) said earlier this week that several Russian radiation monitoring stations went silent shortly after the explosion in Nyonoksa. Lassina Zebro, the organization's executive secretary, said Tuesday that the two Russian stations reported to be offline were back in operation and are now backfilling the data.

Observers said that several stations coming offline at the same time appeared to reflect a coordinated effort to conceal the radiation data, which could help identify the technology that was being tested at the time of the explosion.

The online news site, Meduza, quoted a rescue worker who said that people who were injured by the explosion were exposed to high levels of radiation and that medical teams who treated them lacked the necessary protective gear. It also cited a doctor who treated the patients as saying that the authorities hadn't warned them about the dangerous radiation levels.

Meduza said it didn't publish their real names because of the sensitivity of the issue. The report didn't mention radiation levels the patients and the doctors were exposed to. Speaking in Helsinki, Putin hailed the victims, saying they were doing "very important work for the nation's security," but kept mum on what type of weapon they were testing.

Russia's state nuclear corporation Rosatom said the explosion occurred on an offshore platform during tests of a "nuclear isotope power source" for a rocket engine, a statement that led some experts to conclude that the weapon undergoing tests was the Burevestnik (Storm Petrel), a prospective nuclear-powered cruise missile first mentioned by Putin in 2018 that was code-named "Skyfall" by NATO.

U.S. President Donald Trump has backed that theory in a tweet, saying that the U.S. is "learning much" from the deadly explosion. In a tweet, he said: "The Russian 'Skyfall' explosion has people worried about the air around the facility, and far beyond. Not good!"

The U.S. worked to develop a nuclear-powered missile in the 1960s under Project Pluto, but abandoned the technology as too unstable and risky.