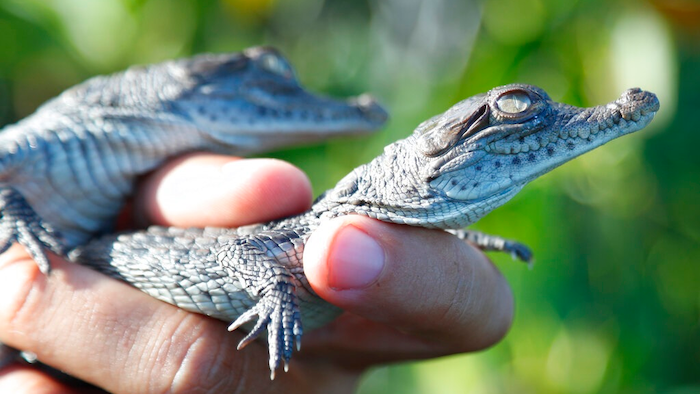 Wildlife biologist/crocodile specialist Michael Lloret releases baby crocodiles back into the wild along the cooling canals next to the Turkey Point Nuclear Generating Station after having measured and tagged them with microchips to observe their development in the future, Friday, July 19, 2019, in Homestead, Fla. The 168-miles of man-made canals serve as the home to several hundred crocodiles, where a team of specialists working for Florida Power and Light (FPL) monitors and protects the American crocodiles.
AP Photo/Wilfredo Lee

MIAMI (AP) — American crocodiles, once headed toward extinction, are thriving at an unusual spot — the canals surrounding a South Florida nuclear plant.

Turkey Point's 168-mile (270 kilometers) of man-made canals serve as the home to several hundred crocodiles, where a team of specialists working for FPL monitors and protects them from hunting and climate change.

From January to April, Michael Lloret, an FPL wildlife biologist and crocodile specialist, helps create nests and ponds on berms for crocodiles to nest. Once the hatchlings are reared and left by the mother, the team captures them. They are measured and tagged with microchips to observe their development. Lloret then relocates them to increase survival rates.

"We entice crocodiles to come in to the habitats FPL created," Lloret said. "We clear greenery on the berms so that the crocodiles can nest. Because of rising sea levels wasting nests along the coasts, Turkey Point is important for crocodiles to continue."

The canals are one of three major US habitats for crocodiles, where 25% of the 2,000 American crocodiles live. The FPL team has been credited for moving the classification of crocodiles on the Endangered Species Act to "threatened" from "endangered" in 2007. The team has tagged 7,000 babies since it was established in 1978.

Temperature determines the crocodiles' sex: the hotter it is the more likely males are hatched. Lloret said this year's hatchlings are male-heavy due to last month being the hottest June on record globally.

Because hatchlings released are at the bottom of the food chain, only a small fraction survives to be adults. Lloret said they at least have a fighting chance at Turkey Point, away from humans who hunted them to near-extinction out of greed and fear even though attacks are rare. Only one crocodile attack has ever been recorded in the U.S. - a couple were both bitten while swimming in a South Florida canal in 2014, but both survived.

"American crocodiles have a bad reputation when they are just trying to survive," Lloret said. "They are shy and want nothing to do with us. Humans are too big to be on their menu."