The measure followed a string of fiery and explosive oil train derailments over the past decade. 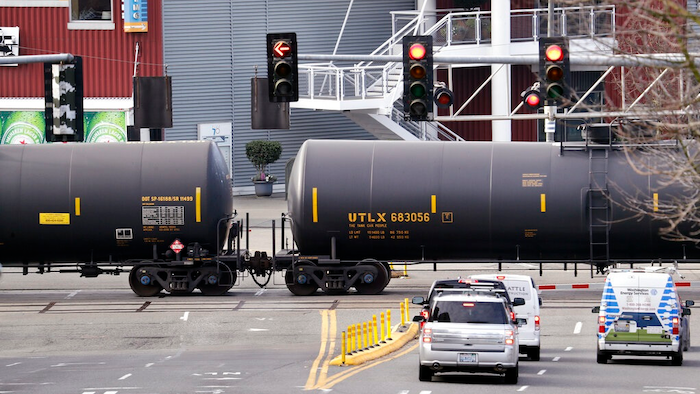 - In this Feb. 13, 2018, file photo, automobile traffic waits at a train crossing as train cars that carry oil are pulled through downtown Seattle. Attorneys general for North Dakota and Montana have petitioned the Trump administration Wednesday, July 17, 2019, to overrule a Washington state law that imposes safety restrictions on oil shipped by rail from the Northern Plains.
AP Photo/Elaine Thompson, File

BILLINGS, Mont. (AP) — Attorneys general for North Dakota and Montana asked the Trump administration on Wednesday to overrule a Washington state law that imposed new restrictions on oil trains from the Northern Plains to guard against explosive derailments.

Washington Gov. Jay Inslee, a Democrat, in May signed the measure that requires oil shipped by rail through the state to have more volatile gases removed to reduce the risk of explosive and potentially deadly derailments.

The move followed a string of fiery and explosive oil train derailments over the past decade, including a 2013 accident in Lac-Megantic, Quebec, that killed 47 people. The explosions drew widespread public attention to the volatile nature of Bakken crude shipments.

But opponents say the new restrictions would make Pacific Northwest refineries effectively off-limits to crude from the Bakken region, one of the nation's most productive oil fields straddling the North Dakota-Montana border. That's because the process of treating the oil to make it less volatile would be too expensive to justify, they said.

"It's pretty clear in this the state of Washington overstepped its bounds," Fox said. "The effect would be terrible, both on the economies of North Dakota and Montana and also how it offends the rule of law."

Fox and Stenehjem also warned that allowing Washington's law to stand could inadvertently undermine safety, by subjecting the railroad industry to a hodge-podge of state laws instead of a common federal standard.

Shipping the region's crude by rail has become common practice due to a limited number of pipelines, which are considered a safer way to ship oil.

In the first quarter of 2019, almost 16 million barrels of crude (670 million gallons) moved through Washington state, almost all of it from North Dakota, according to a recent report from the Washington Department of Ecology.

"As Washington has experienced an enormous spike in the numbers of oil trains traveling through our state, this legislation is a reasonable approach to anticipated increased volumes of volatile crude oil," Smith said.

U.S. Department of Transportation representatives did not respond to telephone and email messages seeking comment. The agency has six months to issue a decision on the petition or explain why a decision is delayed, according to Fox spokesman John Barnes.