Nevada first raised concerns about Yucca Mountain back in 2008. 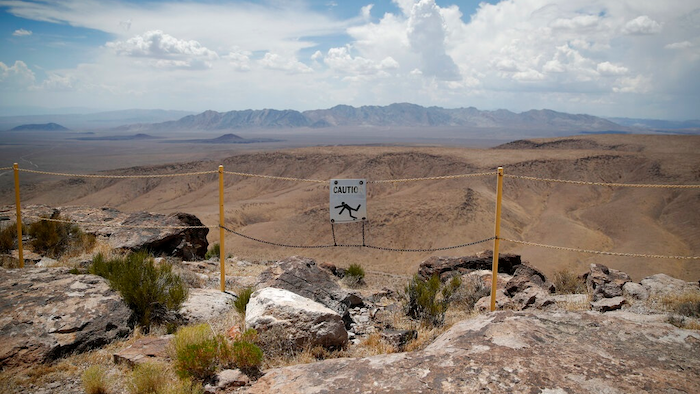 In this July 14, 2018, file photo, a sign warns of a falling danger on the crest of Yucca Mountain during a congressional tour near Mercury, Nev. Nevada's governor and congressional delegation say recent earthquakes should make the U.S. Energy Department look again at seismic risks at a site eyed as the place to bury the nation's nuclear waste, Wednesday, July 17, 2019.
AP Photo/John Locher, File

LAS VEGAS (AP) —        Nevada's governor and congressional delegation are pointing to earthquakes this month in the California desert and calling for the U.S. Energy Department to look again at seismic risks of burying the nation's most radioactive nuclear waste at a site in the Mojave Desert.

"These significant recent earthquakes so near to Yucca Mountain show one of the many geologic problems with the site as a nuclear waste repository," Sisolak said in a statement, adding that the state is resolved "to fight any continued federal effort to use Nevada as the nation's nuclear dumping ground."

Ridgecrest is 108 miles (174 kilometers) west of Yucca Mountain, an ancient volcanic ridge at the western edge of the Nevada National Security Site. The site is a vast secure federal reservation some 90 miles (145 kilometers) northwest of Las Vegas where the U.S. used to conduct nuclear weapons tests.

An Energy Department spokeswoman said in an email that the agency would respond to the letter "through the proper channels."

The government in 1982 began studying Yucca Mountain as a remote and secure repository. The site was designated by Congress in 2002 as the only site in the nation to receive the material.

But the project was shelved in 2010 under pressure from then-Senate Democratic Majority Leader Harry Reid of Nevada and President Barack Obama. They said nuclear waste should be stored in a state that wants it.

Nevada has fought the proposed repository at every step — challenging site selection and engineering and transportation decisions, as well as withholding land and water permits.

The state began arguing 11 years ago, before the Nuclear Regulatory Commission, that Energy Department studies improperly downplayed the risk of earthquakes damaging a repository and releasing deadly radioactivity.

With his letter to Perry, Sisolak included opinions by the state's top earthquake experts: James Faulds at the Nevada Bureau of Mines and Geology and Graham Kent at the seismological laboratory at the University of Nevada, Reno.

They said scientific tools developed since Yucca Mountain was studied in the 1980s and 1990s could provide enhanced satellite imaging of desert surface features; new mapping of faults and seismic hazards; better charts of the age and frequency of past earthquakes; and help create models for the effects of quakes close and far from Yucca Mountain.

"The Ridgecrest earthquake sequence, which began July 4 and has yet to subside, clearly highlights the importance of such studies," Faulds and Kent said.