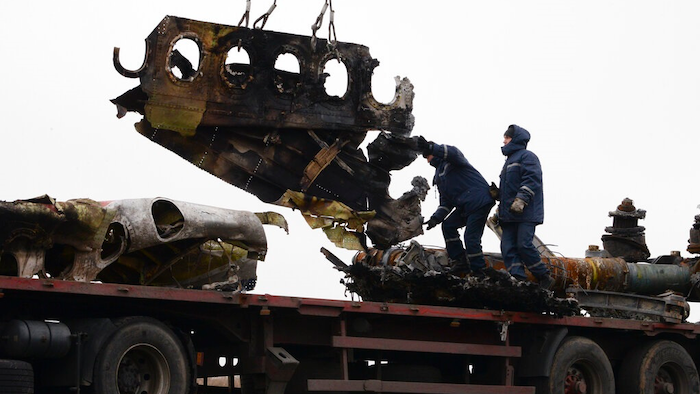 In this file photo dated Sunday, Nov. 16, 2014, recovery workers in rebel-controlled eastern Ukraine load debris from the crash site of Malaysia Airlines Flight 17, in Hrabove, Ukraine, with recovery operations carried out under the supervision of Dutch investigators and officials from the Organization for Security and Cooperation in Europe. Five years after a missile blew Malaysia Airlines Flight 17 out of the sky above eastern Ukraine, relatives and friends of those killed will gather Wednesday July 17, 2019, at a Dutch memorial to mark the anniversary.
AP Photo/Mstyslav Chernov, FILE

VIJFHUIZEN, Netherlands (AP) — Five years after a missile blew Malaysia Airlines Flight 17 out of the sky above eastern Ukraine, relatives and friends of those killed gathered Wednesday at a Dutch memorial to mark the anniversary.

Hours before the start of a memorial ceremony, families began arriving, many holding hands and clutching bunches of sunflowers.

The names of all 298 passengers and crew killed on July 17, 2014, will be read out at a solemn ceremony at a monument surrounded by trees, one planted for each victim, close to Amsterdam's Schiphol Airport, where passengers boarded the flight heading to Kuala Lumpur, Malaysia.

Dutch Prime Minister Mark Rutte and the head of a foundation of relatives of the dead were delivering speeches at the ceremony.

Nearly 200 of the victims were Dutch; others came from countries including Malaysia, Australia, Canada, Britain and Belgium.

In the five years since the plane was shot down, a Dutch crash investigation ruled that a Buk surface-to-air missile brought down the Boeing 777.

A separate criminal investigation concluded that the missile system was trucked into Ukraine from Russia.

Last month, a Joint Investigation Team made up of detectives from the Netherlands, Malaysia, Australia, Ukraine and Belgium said it will prosecute four suspects, in their absence if necessary, at a trial set to start in March.

They are charged with involvement in the murder of all those who lost their lives. The team said that even if the four may not have personally launched the Buk missile that downed the plane, they were implicated in the preparations of the launch, making it sufficient to charge them.

Those indicted include Igor Girkin, a retired colonel in Russia's main intelligence agency, the FSB, who led Russian and separatist forces in Ukraine's Donetsk region in 2014. He has dismissed the accusations.

Russia has called the charges "absolutely unfounded" and accused investigators of using "dubious" information and ignoring evidence provided by Moscow in order to discredit Russia.

On Tuesday, U.S. State Department spokeswoman Morgan Ortagus expressed sympathy to the families and friends of victims and called on Russia "to ensure that individuals currently in Russia who were indicted by Dutch prosecutors in June will face justice."