The train was on its first paid passenger run on a new route to Portland, when it plunged onto Interstate 5, killing three people and injuring dozens. 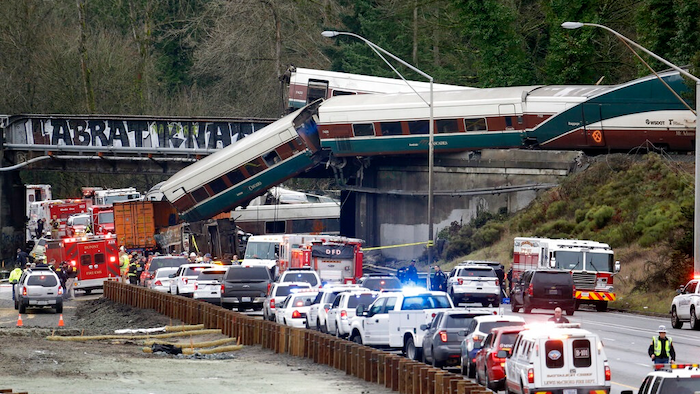 In this Dec. 18, 2017, file photo, cars from an Amtrak train lay spilled onto Interstate 5 below as some remain on the tracks above in DuPont, Wash. The National Transportation Safety Board has published its final report Monday, June 24, 2019, on a deadly Amtrak derailment in Washington state in 2017, with the agency's vice chairman blasting what he described as a "Titanic-like complacency" among those charged with ensuring train operations are safe. The train was on its first paid passenger run on a new route from Tacoma to Portland, Oregon, when it plunged onto Interstate 5, killing three people and injuring dozens.
AP Photo/Elaine Thompson, file

SEATTLE (AP) — The National Transportation Safety Board has published its final report Monday on a deadly Amtrak derailment in Washington state in 2017, with the agency's vice chairman blasting what he described as a "Titanic-like complacency" among those charged with ensuring train operations were safe.

The train was on its first paid passenger run on a new route from Tacoma to Portland, Oregon, when it plunged onto Interstate 5, killing three people and injuring dozens.

In findings released last month, the NTSB said the engineer lost track of where he was and failed to slow down before a curve. The agency said a series of decisions or inactions by Amtrak as well as state and federal regulators set the engineer up to fail. The agency's vice chairman, Bruce Landsberg, wrote in comments published with the final report Monday that the root cause was "extremely lax safety oversight, unclear responsibility, and poor training."

"There was a Titanic-like complacency and certainty exhibited by those tasked with the safety, operation and management of the Point Defiance Bypass rail line before the revenue service started in 2017," Landsberg wrote. "The term 'accident' is inappropriate because that implies that this was an unforeseen and unpredictable event. It was anything but unforeseeable."

Landsberg noted that the NTSB has been investigating derailments caused by speeding trains around curves for decades, and that the agency has also spent decades urging the Federal Railroad Administration to require "positive train control," GPS-based technology that can automatically slow or stop trains.

Congress mandated the technology by the end of last year, but compliance has been spotty and the deadline has been extended. It hadn't been implemented on the new bypass route in Washington when the derailment occurred, but it is now in effect on the bypass and on the rest of the Amtrak Cascades passenger route from the Canadian border to Eugene, Oregon.

The railroad administration said in an emailed statement Monday that it is reviewing the report and dedicated to helping ensure the full implementation of positive train control.

The NTSB pointed out that earlier this month, the railroad administration filed a rulemaking notice that it is seeking to further delay requirements that commuter and intercity passenger railroads implement "system safety programs" where they identify and mitigate all risks along their routes. NTSB member Jennifer Homendy said in a press release Monday that if the railroad administration is going to continue to drag its feet, the railroads should act on their own.

"The Federal Railroad Administration's notice of proposed rulemaking once again delays the implementation of regulations that will make passenger rail operations safer," Homendy said. "The absence of a sense of urgency to implement this safety recommendation and the willingness to continue to jeopardize the safety of train crews and their passengers is unacceptable."

In the final report, the NTSB faulted regional transit agency Sound Transit for not sufficiently mitigating the danger of the sharp bend; Amtrak for not better training the engineer; the state Department of Transportation for not ensuring the route was safe before green-lighting passenger train service; and the railroad administration for allowing the use of European-style rail cars that didn't meet updated safety standards.

In a written statement, Amtrak said it has worked with the NTSB to address its recommendations, to implement positive train control across its network, and to identify and mitigate risks. It submitted its system safety program to the railroad administration last November, it noted.

"We remain deeply saddened by the loss of life and injuries due to this tragic event," Amtrak said in a written statement Monday. "Amtrak remains committed to continuously improving safety for both our customers and employees."

The NTSB's final report issued 26 new safety recommendations and reiterated three that already exist. They included the placement of more signs along tracks to remind engineers where they are and of speed limits, and the replacement of four Talgo trainsets used on the Amtrak Cascades line.

Janet Matkin, a spokeswoman for the Washington Department of Transportation's rail division, said the Talgo trains — two owned by Washington state, and two owned by Amtrak — met safety standards when they were first used on the Cascades line about two decades ago. Their use was grandfathered in when the standards were later updated.

"The finding that we're focusing on right now is the recommendation that we replace the Talgo trainset as soon as possible," she said. "We are working with Amtrak to identify substitute equipment we can move to the Pacific Northwest. It's not easy to find extra equipment, especially during the busy summer travel times."

The state had already planned to replace the four trains in the mid-2020s, at a cost of $25 million each. The Oregon Department of Transportation also owns two Talgo trains, but those are newer and do meet safety requirements, Matkin said.