30 Die in Fire at Indonesian Home Used as Factory

Millions of Indonesians work in unsafe conditions in informal or poorly regulated industries. 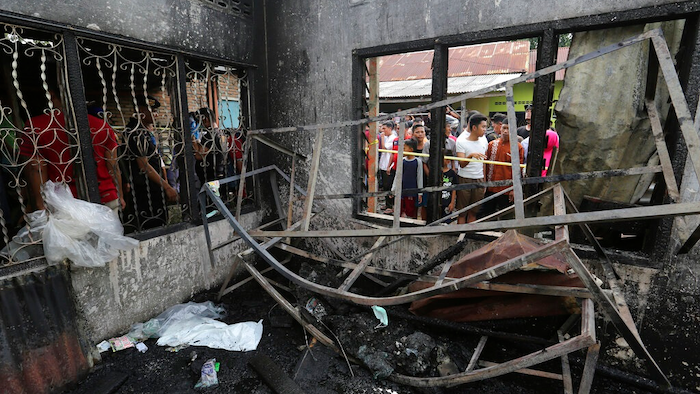 Residents examine the damage after a fire razed through a match factory in Langkat, North Sumatra, Indonesia, Friday, June 21, 2019. A number of people including children were killed in the fire that swept through a house that doubled as a match factory, a disaster official said Friday.
AP Photo

MEDAN, Indonesia (AP) — At least 30 people including children were killed in a fire that swept through a house that doubled as a match factory in Indonesia's North Sumatra province, a disaster official said Friday.

Irwan Syahri, from the local disaster mitigation agency in Langkat district, said the dead included three children. He said many of the victims were burned beyond recognition.

Faisal Riza, whose wife Marlina died in the fire, said the workers at the match business were all women, some of whom had their children with them.

"I was walking to a mosque for prayers when I heard the factory in an alley just about 200 meters from my house was on fire," he said at a police hospital in the provincial capital Medan where bodies were taken. "I ran to save her, but it was too late. When I got there, the factory was burned down."

The house owner, an elderly woman identified only as Ros, told MetroTV that she had rented the property for the past four years to a businessman from the provincial capital, Medan.

Another man, Sofyan, said his wife and 10-year-old daughter died in the fire and were preventing from escaping by a locked front door that was also blocked by equipment. The fire started at the rear of the property, he and Riza said.

"Only a DNA test can confirm the bodies," said Sofyan, who uses a single name. "I want to bring them home soon regardless of their condition. I want to bury them immediately."

Millions of Indonesians work in unsafe conditions in informal or poorly regulated industries and accidents and fatalities are common.

Dozens died in the collapse of an unlicensed gold mine in North Sulawesi in February, and at least 47 people including underage workers were killed by a blaze at a fireworks factory in a Jakarta satellite city in October 2017.