The cause is still under investigation. 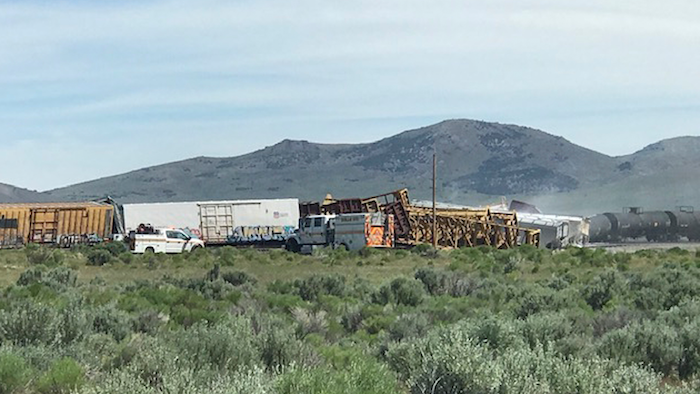 A train carrying military munitions derailed in the high desert of northeast Nevada on Wednesday, closing an interstate for about an hour before emergency crews determined there was no danger.
Nevada Department of Public Safety via AP

WELLS, Nev. (AP) — A train carrying military munitions derailed in the high desert of northeast Nevada on Wednesday, closing an interstate for about an hour before emergency crews determined there was no danger. No injuries were reported.

Cars carrying the munitions to a Nevada Army depot were not among the 23 that derailed near the rural community of Wells not far from the Utah-Nevada state line, officials said. A white aluminum oxide was released, the Nevada Highway Patrol said. The powder was described as a mild skin irritant, but not a hazardous material.

Union Pacific spokeswoman Kristen South confirmed there were hazardous materials and ammunition on the train but said none were in the derailed cars. Some non-hazardous aluminum oxide was spilled along with a small amount of diesel fuel, South said. She said earlier reports that the spilled substance was vegetable oil were inaccurate.

"Union Pacific is working on site cleanup," she wrote in an email to The Associated Press. "A timeline for completion is not known, at this time. The cause of the derailment is under investigation." About 60 miles of the interstate near the railroad was closed in both directions from about 11 a.m. to noon.

"At this time, we have no information regarding why the train derailed," Highway Patrol Trooper Jim Stewart said in a statement. The train was headed west to an Army depot in Hawthorne that dates to 1930 and was developed as a Navy ammunition storage area because of its remoteness. It is about 125 miles southeast of Reno.

It was transferred in 1977 to the Army. It provides storage for old munitions and explosives, including some that could be reactivated, and serves as a training facility for special forces units. In March 2013, it was the site of a training accident that killed seven Marines and injured eight others.