Safeguards Failed in Fire that Killed 5 at Gas Well

The explosion was the deadliest drilling accident since the Deepwater Horizon rig exploded in the Gulf of Mexico in 2010.

Tim Talley
In this Monday, Jan. 22, 2018, file photo, smoke billows from the site of a gas well fire near Quinton, Okla. A federal report says the explosion and fire that killed five workers at the southeastern Oklahoma natural gas well in 2018 was caused by the failure of blowout prevention devices and other factors.
Kevin Harvison/The McAlester News-Capital via AP, File

OKLAHOMA CITY (AP) — The failure of safety devices designed to prevent blowouts contributed to an explosion and fire that killed five workers last year at a southeastern Oklahoma natural gas well, according to a federal agency's report Wednesday that also lists inadequate training and a deactivated alarm system as factors.

The report by the U.S. Chemical Safety and Hazard Investigation Board says the safeguards, designed to prevent the uncontrolled release of gas and other fluids from the well, were ineffective before the Jan. 22, 2018, explosion and fire in Pittsburg County near Quinton, which is about 125 miles (200 kilometers) east of Oklahoma City.

Among other things, the 158-page report found certain operations at the Houston-based Patterson-UTI Energy Inc. drilling site were conducted "without needed planning, equipment, skills, or procedures," nullifying the primary barrier designed to prevent a blowout.

In a statement, Patterson said it does not agree with all of the agency's findings but is evaluating what policies, procedures and training it could implement to address the issues raised in the report.

"We remain committed to preventing an accident like this from ever happening again," the statement says.

The explosion was the deadliest drilling accident since the Deepwater Horizon rig exploded in the Gulf of Mexico in 2010, killing 11 people. The report represents the first time the board has investigated a deadly accident at an onshore drilling site, according to its interim executive, Kristen Kulinowski,

"This is a very serious incident. Five people lost their lives. That is a threshold we cannot ignore," said Kulinowski, a chemist.

Kulinowski said the board's investigation found a "multitude of issues that went wrong." Among other things, the well's safety management system that was not effective for managing safe rig operations and the driller was not effectively trained in using a method for monitoring the uncontrolled flow of natural gas.

"This was a senseless tragedy that did not need to occur." Kulinowski said.

The report says the explosion followed the removal of a pipe from the well, a process known as "tripping" that the report says was performed in a way that "allowed a large amount of gas to enter the well." The equivalent of more than 8400 gallons (31,800 liters) of natural gas entered the well during the 14 hours before the explosion but was not detected, the board's lead investigator, Lauren Grim, said.

The report says an alarm system that could have detected the escaping gas was switched off. While the reason is unknown, the report noted that alarms set for the drilling operation were perceived as irrelevant for other operations.

The blowout preventer failed to close when workers attempted to activate it after the fire started because control hoses had burned and leaked hydraulic fluid, the agency's report determined. It also says the victims had no safe escape route from the driller's cabin once the drilling mud and gas was ignited, effectively trapping them once the fire started.

Killed in the explosion and fire were Matt Smith of McAlester, Oklahoma; Parker Waldridge of Crescent, Oklahoma; Roger Cunningham from Seminole, Oklahoma; Josh Ray of Fort Worth, Texas; and Cody Risk of Wellington, Colorado. Autopsies determined all five men died of burns and smoke inhalation.

Family members of the victims filed lawsuits alleging, among other things, that the well's operator used a cheaper and quicker drilling plan than experts advised and ignored warnings that safety equipment at the well site was malfunctioning prior to the explosion. The agency's report does not specifically address those allegations.

Patterson has said it does not comment on pending litigation but is committed to preventing future accidents.

The report says few regulations govern the safety of onshore oil and gas drilling operations in the U.S. It provides a series of recommendations that the agency said could help prevent future catastrophic blowouts and protect people as well as the environment, including a suggestion that the American Petroleum Institute convening a group of experts in drilling, engineering and instrumentation to discuss ways to implement automatic safety instrumented systems industrywide to control an oil and gas well when other operational barriers fail. 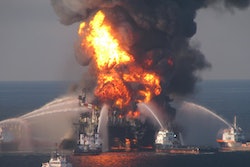