OSHA Says Street Should Have Closed Before Bridge Collapse

Engineers had knowledge of extensive cracking and failed to order a street closed. 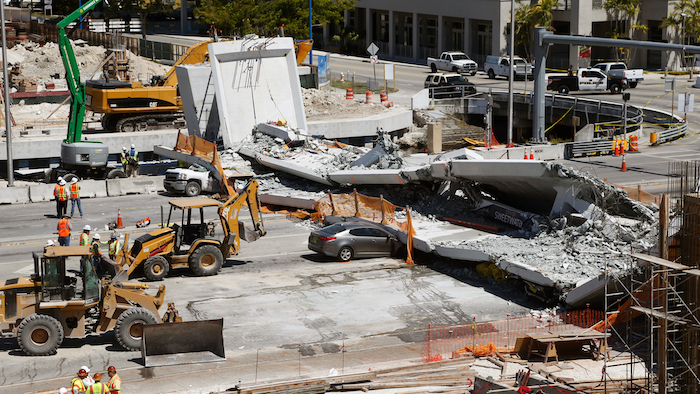 In this March 16, 2018 file photo crushed cars are shown under a section of a collapsed pedestrian bridge near Florida International University in the Miami area. A federal workplace safety agency says engineers had knowledge of extensive cracking and failed to order to close a street and shore up a pedestrian bridge before it collapsed and killed six people at a Miami university last year. On Tuesday, June 11, 2019 a report by the U.S. Occupational Safety and Health Administration concluded the size of the cracks warranted the street be shut down immediately.
AP Photo/Wilfredo Lee

MIAMI (AP) — Engineers had knowledge of extensive cracking and failed to order a street closed and shore up a pedestrian bridge before it collapsed and killed six people at a Miami university last year, according to findings revealed by a federal workplace safety agency.

The U.S. Occupational Safety and Health Administration concluded in a report released Tuesday that the size of the cracks warranted the street be shut down immediately.

Investigators say the bridge cracked because of "deficient structural design," and blame independent inspectors for not instructing that Florida International University and the bridge contractor to stop traffic.

The findings were first reported Tuesday in the Miami Herald. Included are emails and texts from construction workers alerting supervisors of cracks days before the bridge collapsed on March 15, 2018.

A crew supervisor working for one of the contractors was "visibly disturbed" with cracks he had seen soon after the span was put in place on March 10, 2018. Kevin Hanson, who the agency says is "regarded as one of the most knowledgeable (post-tensioning) field personnel in South Florida," took some pictures.

"It cracked like hell" Hanson said in a text message to his boss, sending along photos showing cracking. The report says Hanson also alerted a manager at the bridge contractor, Munilla Construction Management.

An email with other photos of cracks followed that text between another senior manager at Munilla Construction Management and superiors at the firm FIGG Bridge Engineers, which designed the structure, alerting "your immediate attention and response is required."

But FIGG said that it evaluated the cracks and didn't find safety concerns. The company also told investigators with OSHA that the cracks did not expand, contrary to what other engineers were saying at a meeting on the morning of the collapse.

Hours later, the 174-foot-long (53-meter) span collapsed onto traffic flowing on the roadway beneath the bridge. The collapse killed six people, including one construction worker. Hanson, who sent the text, was critically injured.

The same agency last year fined contractors more than $86,000 for violations related to the collapse.

The National Transportation Safety Board continues investigating and is expected to publish its report later this year.