Contractors credit a new underwater system for capturing and collecting crude at the site where oil has been leaking. 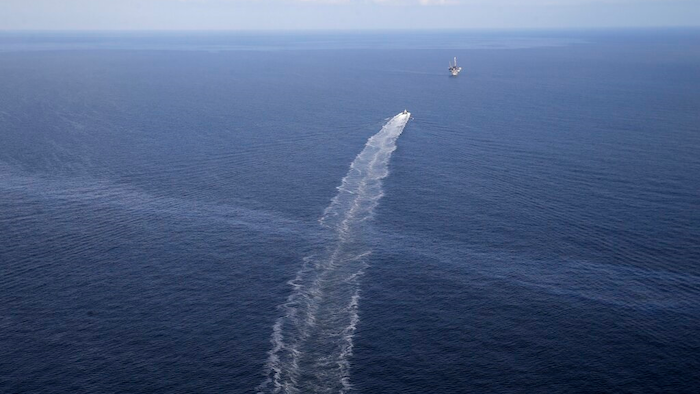 In this March 31, 2015 file photo, the wake of a supply vessel heading towards a working platform crosses over an oil sheen drifting from the site of the former Taylor Energy oil rig in the Gulf of Mexico, off the coast of Louisiana. The Coast Guard says a newly installed containment system is collecting oil at the site of the 14-year-old oil leak in the Gulf of Mexico. A Coast Guard statement Thursday, May 16, 2019, describes the installation of the subsea containment system as a “major milestone” in the federal government’s long-running efforts to contain the leak.
AP Photo/Gerald Herbert, File

A chronic sheen has become "barely visible" since government contractors installed a new underwater system for capturing and collecting crude at a site in the Gulf of Mexico where oil has been leaking for 14 years, a Coast Guard official said Thursday.

A Coast Guard statement describes the installation of the subsea containment system as a "major milestone" in long-running efforts by the federal government to contain the leak. More than 30,000 gallons of oil has been recovered since the system began operating, government attorneys said in a court filing Tuesday.

"After monitoring the system for several weeks we have determined that the system is meeting federal containment standards," Capt. Kristi Luttrell said in the Coast Guard's statement. "At this time the system is working and the once (predominantly) large surface sheen has been reduced to barely visible."

Taylor Energy Co. ultimately is responsible for ending the leak at the site 11 miles off Louisiana's coast where one of its oil platforms toppled during a 2004 hurricane. The New Orleans-based company sued Luttrell in December, attempting to challenge her order in November to design and install a new system to capture and remove the crude before it forms slicks that often have stretched for miles.

Taylor Energy "looks forward to receiving the information needed to confirm the Coast Guard's statement, which, if accurate, is encouraging," said a statement released Thursday by a company spokesman.

Justice Department attorneys, who represent Luttrell in Taylor Energy's federal suit, said in Tuesday's court filing that the containment system's collection tanks have been pumped three times and the recovered oil has been transported to shore.

"Based on the amount of oil captured to date, the Coast Guard is preparing a standard operating procedure for containment operations and maintenance," they wrote.

The government lawyers said they intend to file a request by May 24 for the court to dismiss the case against Luttrell, arguing the company's claims are moot given the "progress of work at the site."

"It's good that they have found something that's working for now, but it's a temporary fix," said Ian MacDonald, a Florida State University oceanography professor who was an expert witness for environmental groups that sued Taylor Energy in 2012.

The federal government has cited an estimate that approximately 10,500 to 29,400 gallons (39,747 to 111,291 liters) of oil is leaking daily from the leak site. That estimate, contained in a report that the government commissioned from a different Florida State University researcher, was much higher than previous government estimates and dwarfs the company's own assessment of the leak's volume.

A 2015 investigation by The Associated Press also revealed evidence that the leak was worse than the company or government had publicly reported during their secretive response. Presented with AP's findings that year, the Coast Guard provided a new leak estimate that was about 20 times larger than the company's estimate at the time.

Hurricane Ivan in 2004 triggered an underwater mudslide that wrecked Taylor Energy's platform and buried a cluster of oil wells under mounds of sediment, preventing the company from employing traditional techniques to plug them.

Taylor Energy plugged nine wells, leaving 16 unplugged. Federal regulators believe oil and gas is leaking from at least one unplugged well. They have warned that the leak could last a century or longer if left unchecked.

Taylor Energy has argued that performing more work out at the leak site could be dangerous and cause more environmental harm than good. The company has insisted there is no evidence any wells are still leaking. It has claimed residual oil is oozing from sediment on the seafloor.

Healthy Gulf, a New Orleans-based environmental advocacy group, has asked a judge for permission to intervene in Taylor Energy's suit against Luttrell.

"After 14 years, we are glad the Coast Guard is taking action to contain this runaway oil spill," Healthy Gulf spokesman Dustin Renaud said in a statement. "Now we must make sure that they follow through on a permanent solution and ensure a spill like this never goes unchecked again."