The airline owns simulators to help pilots train on the Boeing 737 Max, which has software installed that requires new training. 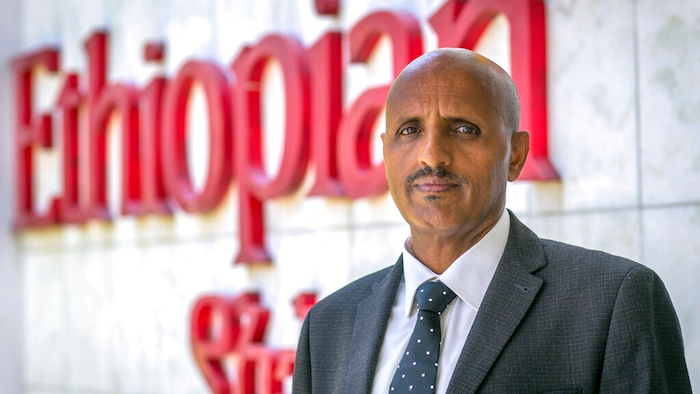 Tewolde Gebremariam, Chief Executive Officer of Ethiopian Airlines, poses for a photograph after speaking to The Associated Press at Bole International Airport in Addis Ababa, Ethiopia Saturday, March 23, 2019. The chief of Ethiopian Airlines says the warning and training requirements set for the now-grounded 737 Max aircraft may not have been enough following the Ethiopian Airlines plane crash that killed 157 people.
AP Photo/Mulugeta Ayene

ADDIS ABABA, Ethiopia (AP) — Ethiopian Airlines' CEO says the pilots who flew the plane that crashed on March 10 had trained on "all appropriate simulators," rejecting reports that they had not been adequately prepared to handle the new aircraft.

Tewolde Gebremariam said in a statement Monday that the airline owns simulators to help pilots train on the Boeing 737 Max, which has software installed that requires new training. The software can pitch the plane's nose down in some cases to keep it from stalling.

There is speculation that the software could have contributed to the crash, which killed 157 people, as well as to the crash of another Boeing 737 Max, a Lion Air flight, in October.

Regulators say both planes had similar erratic flight paths shortly after take-off, an important part of their decision to ground the roughly 370 Max planes around the world.

After the Lion Air crash off the coast of Indonesia, the U.S. Federal Aviation Administration and Boeing issued new training material for pilots. Questions lingered, however, whether the required training was sufficient and whether airlines like Ethiopian had access to simulators to give pilots thorough experience handling the software.

"Contrary to some media reports, our pilots who fly the new model were trained on all appropriate simulators," Gebremariam said. "The crews were well trained on this aircraft."

The CEO, however, had told The Associated Press this weekend that he thinks the warnings and extra training material from Boeing and U.S. regulators "might not have been enough."

Ethiopian Airlines is widely seen as Africa's best-managed airline. It had been using five of the Max planes and was awaiting delivery of 25 more.

Boeing is updating the plane's anti-stall software and has invited more than 200 pilots, technical experts and regulators to its factory in Renton, Washington, for a briefing.

As part of the update, Boeing said it is tweaking the anti-stall software. After the update, the system will rely on data from more than one sensor before it automatically pushes the plane's nose lower. The system won't repeatedly push the nose down, and it will reduce the magnitude of the change.

Boeing said it will pay to train airline pilots.

The Ultraviolet Light That is Most Effective at Killing Coronavirus

The explosion was caused by a failure during the production process.
Oct 25th, 2021

Four people in different states came down with a serious tropical disease even though none had traveled internationally.
Oct 25th, 2021

The material inside the containers prevented the ship’s crew from spraying cold water on the fire.
Oct 25th, 2021

At least 19 people in the U.S. and 28 worldwide have been killed by exploding Takata inflators.
Oct 21st, 2021