The $1 billion figure is a conservative starting point. 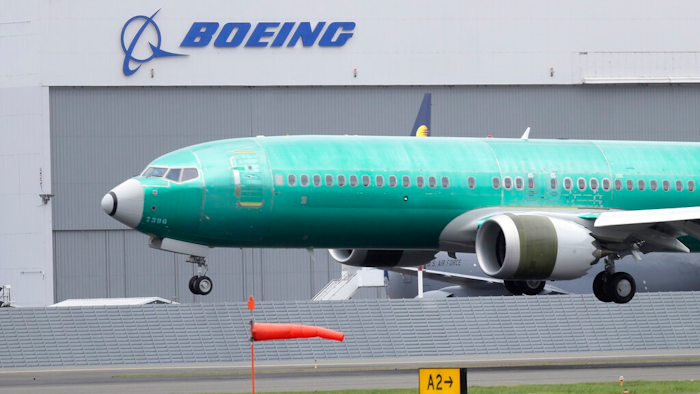 Boeing is already estimating a $1 billion increase in costs related to its troubled 737 Max and has pulled its forecast of 2019 earnings because of uncertainty surrounding the jetliner, which remains grounded after two crashes that killed 346 people.

The $1 billion figure is a conservative starting point. It covers increased production costs over the next few years but does not include the company's spending to fix software implicated in the crashes, additional pilot training, payments to airlines for grounded jets, or compensation for families of the dead passengers.

The estimate was disclosed Wednesday in a presentation for investors as Boeing released first-quarter financial results, which missed Wall Street expectations.

While lacking many details, the disclosures gave the clearest picture yet of the financial damage that the accidents are causing to the aerospace giant.

Boeing CEO Dennis Muilenburg repeated that the company is making progress on updating key flight-control software in the Max with the goal of convincing regulators to let the plane fly again.

The company also said it is suspending stock buybacks. Boeing spent $2.3 billion in the first quarter to buy its own stock, which is designed to make remaining shares more valuable.

Investors and consumers have been scrutinizing Boeing since Max jets crashed in October and March. The accidents have damaged the company's reputation for safety, caused the worldwide grounding of about 370 Max jets, and raised questions about the U.S. government's approval of the plane in 2017.

In January, Boeing projected full-year adjusted earnings of about $20 a share. After the company's announcement that it was cutting production of the Max, however, analysts had dropped their forecast all the way to $16.40 on average, according to FactSet.

On a conference call, Muilenburg defended the company after an analyst asked how Boeing got in this spot. The CEO disputed the notion that Boeing engineers and federal regulators may not have fully understood how pilots would interact with new anti-stall software called MCAS.

"There was no surprise or gap or unknown here, or something that somehow slipped through a certification process," Muilenburg said.

"We also know there are areas where we can improve," he added, explaining why Boeing is now upgrading MCAS with changes that will limit the software's ability to automatically force the plane's nose down powerfully in some circumstances.

Executives gave no update on a timetable for regulatory approval of the software fix and pilot-training program. The company has completed test flights, and the next crucial step is a certification flight with Federal Aviation Administration representatives on board.

Preliminary reports indicate that faulty sensor readings triggered MCAS and pushed the nose down in both the Oct. 29 crash of a Lion Air jet off the coast of Indonesia and the March 10 crash of an Ethiopian Airlines Max. Boeing began working on a software fix immediately after the first crash.

Foreign regulators are expected to take longer than FAA to approve resumed flights. When that happens, Boeing says it has a plan to win over passengers who are reluctant to get back on a Max jet, but admits it will take time for travelers to regain confidence in the plane.

"We think a key voice in all of this will be the pilots for our airlines," Muilenburg said. "That bond between the passenger and the pilot is one that is critical."

Dennis Tajer, a 737 pilot and union spokesman at American Airlines, said that "if and when we are confident in the Max we will do more than speak publicly about it, we will be right there with our passengers."

Tajer said Muilenburg, airline CEOs and regulators should show their faith in the Max by flying on it too, perhaps with their families.

Profit adjusted to exclude non-repeating items was $3.16 per share. Analysts surveyed by FactSet expected $3.19 per share on revenue of $22.94 billion, and both of those forecasts had been reduced considerably in the past month.

Boeing has about 4,600 unfilled orders for the Max. After the planes were grounded and no more were being delivered to airliners, the company cut its production from 52 to 42 a month, at least temporarily jeopardizing plans to boost production to 57 planes a month this summer.

Goldman Sachs analyst Noah Poponak said the impact of the Max grounding was earlier and larger than he had expected.

UBS analyst Myles Walton said the company's estimate of a $1 billion hit from the Max situation was "likely below the low end of anyone's thinking." Still, Boeing stock should get a boost, he added, when the company submits its work to the FAA for certification, likely in the next couple weeks.