The accident happened 40 miles off the Italian coast.

ROME (AP) — A crane toppled from a methane gas extraction platform on Tuesday, plunging into the Adriatic Sea and killing the crane's operator, the Italian energy company Eni said.

Coast Guard Rear Adm. Enrico Moretti told Sky TG24 TV the operator was trapped in the cabin of the crane, which had been loading a 7-ton canister.

An Italian air force helicopter, fire department divers and coast guard boats had searched for the 63-year-old Italian. The Italian news agency ANSA said that the body, still in the cabin, was located by divers some 70 meters (230 feet) down in the sea.

Eni confirmed that the body was found inside the cabin on the seabed near the platform Barbara F.

The energy giant said it has begun investigating what happened. Italian prosecutors will also conduct an investigation. 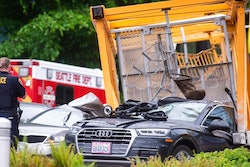