The complaints focus on the linkage between the steering box and front wheels coming apart.

The U.S. National Highway Traffic Safety Administration is investigating complaints that the steering can fail on some Ram pickup trucks. The investigation covers about 200,000 Ram 2500s from the 2015 and 2016 model years.
AP Photo/Gene J. Puskar, File

DETROIT (AP) — The U.S. National Highway Traffic Safety Administration is investigating complaints that the steering can fail on some Ram pickup trucks. The investigation covers about 200,000 Ram 2500s from the 2015 and 2016 model years.

The government agency said Thursday that it has two complaints that the linkage between the steering box to the front wheels can come apart. One owner complained that the problem happened while rounding a curve at 65 to 70 mph. The driver lost steering and the truck went off the right side of the road, hitting ditches before stopping on the shoulder. One injury was reported.

In both cases the problem was traced to a mechanism used to align the steering system. Fiat Chrysler, which makes Ram pickups, says it is cooperating with the safety agency

Investigators will determine how often the problem happens and whether a recall is needed. 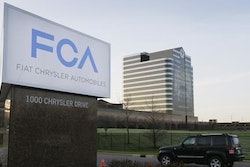