The leak was the second problem with aging tunnels at the Hanford Nuclear Reservation in a year.

Nicholas K. Geranios
Officials have ordered some workers at a sprawling Washington state nuclear waste site to go inside and stay there because steam has emerged from a tunnel filled with waste that was being filled with cement. The U.S. Department of Energy says in a statement Friday that there is no indication that the steam seen at the Hanford Nuclear Reservation contains radiation or any other hazardous material and that the workers were ordered inside as a precaution.
AP Photo/Manuel Valdes

SPOKANE, Wash. (AP) — No airborne radiation was detected after steam escaped Friday from a tunnel containing radioactive waste at a former nuclear weapons production site in Washington state, U.S. officials said, the second problem with aging tunnels at the Hanford Nuclear Reservation in a year.

Workers who had been ordered to stay inside buildings were released about five hours later, the U.S. Department of Energy said. There were no reports of injuries.

The agency said cameras revealed that the steam resulted from the drying of a cement-like grout that was recently pumped into the 54-year-old tunnel to stabilize it. The tunnel stores nuclear waste in railroad cars left over from the Cold War, and it's in danger of collapsing.

"The curing process generates heat and moisture," the agency said in a press release. "When the warm moist air left the tunnel and interacted with the cool early morning atmosphere, steam was visible."

Most of the plutonium for the nation's nuclear arsenal was created at Hanford, located along the Columbia River in eastern Washington. About 9,000 workers on the site are involved in cleaning up the nation's largest collection of radioactive waste left over from the production of nuclear weapons.

A different tunnel at Hanford partially collapsed last year and workers were ordered to stay inside for several hours. There was no airborne release of radiation, and no workers were injured in that incident. Work to fill that tunnel with grout was completed last November.

An analysis found that the tunnel from which steam emerged Friday did not meet structural integrity codes, prompting the decision to fill it completely with a cement-like substance.

A federal contractor has been pumping in the grout since Oct. 1. It was about a quarter full of grout when the steam leaked Friday, and the work will resume in coming days, the Energy Department said.

Hanford was created during the Manhattan Project in World War II and made most of the nation's plutonium, including the plutonium for the atomic bomb that was dropped on Nagasaki, Japan. 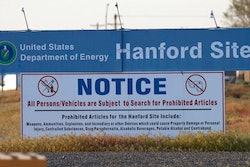 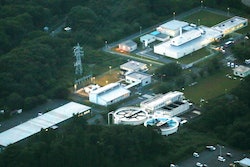 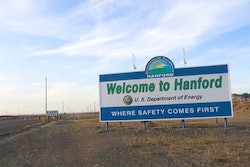