The flames are consuming a 7,000-gallon oil tank.

OKLAHOMA CITY -- Oklahoma City businesses have been evacuated and people are being told to avoid thick, black smoke billowing from a power plant where flames are consuming a 7,000-gallon oil tank.

Battalion Chief Benny Fulkerson says fire crews have retreated a half-mile from the tank and are monitoring the fire that began Thursday morning at an Oklahoma Gas & Electric plant west of downtown.

Fulkerson says initial crews at the scene tried spraying water on the tank but the fire worsened as flames shot out.

Authorities weren't certain as to the product held by the tank so crews backed away out of caution.

Fulkerson says crews are waiting for it to burn out.

He says up to 14 businesses were evacuated and that it's not clear what particles the smoke might contain so the public should steer clear. 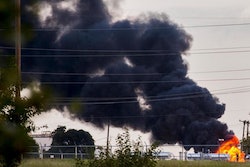