The fire that destroyed a 7,000-gallon oil tank has burned out.

Associated Press
Smoke fills the air as a insulated tank that contains 7000 gallons of heating oil and glycerol burns after catching fire at the OG&E Power plant near NW 10th St. in Oklahoma City, Okla. on Thursday, Oct. 4, 2018.
Chris Landsberger/The Oklahoman via AP

The fire started Thursday morning. Fulkerson says firefighters and plant workers isolated the product from the tank and the flames died out when the contents of the tank burned away.

The fire forced the evacuation of more than a dozen nearby businesses and firefighters warned the public to steer clear because of the smoke. Fulkerson says evacuations were lifted about 2 p.m. Thursday. 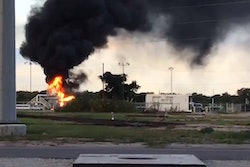