It took about two hours to rescue a person who was "buried and entombed" by fallen debris. 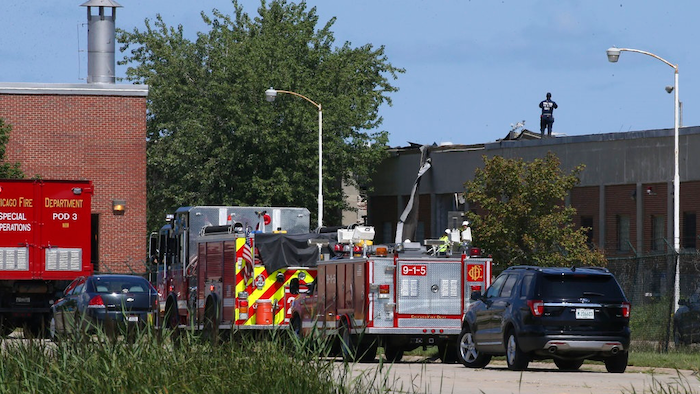 Fire crews are responding to a report of people trapped inside the Calumet Water Reclamation Plant after a fire and possible explosion caused part of the building's roof to collapse, on the Far South Side of Chicago, Thursday, Aug. 30, 2018.
Antonio Perez/Chicago Tribune via AP

CHICAGO (AP) — Ten people were seriously injured Thursday when an explosion caused a section of roof to collapse at a Chicago water reclamation plant, trapping two of the injured people inside, authorities said.

Firefighters pulled one person out shortly after the collapse at the one-story brick building on Chicago's far South Side. It took about two hours to rescue the second person, who was "buried and entombed" by fallen debris, Chicago Fire Commissioner Jose Santiago said.

Paramedics attended to the man while specially trained firefighters tunneled beneath the rubble to reach him and remove a metal beam from his legs. The man, who remained conscious, suffered a broken jaw and leg and was airlifted to the University of Chicago Medical Center, where he was in critical condition.

The other people who were injured were taken to hospitals in serious-to-critical condition, Fire Department spokesman Larry Merritt said.

The explosion occurred shortly before 11 a.m. at the Calumet Water Reclamation Plant's sludge concentration building, according to a statement from the Metropolitan Water Reclamation District, which operates the plant.

Authorities said they are investigating whether the explosion was caused by a buildup of methane, a byproduct of the water treatment process.

Gina Ruiz said she received a phone message from her husband, who had been working inside the plant, saying there had been an explosion and that his co-workers were trapped inside. She said he told her the explosion "blew the roof off and (it) came back down" and that "there were a lot of guys trapped inside."

Her husband was hit by falling pieces of the roof but not seriously injured, she said.