EPA Seeks Dismissal of Lawsuit Over Mine Spill

Utah is seeking $1.9 billion in damages from the EPA. The Navajo Nation filed a claim for $162 million, and the state of New Mexico is seeking $130 million. 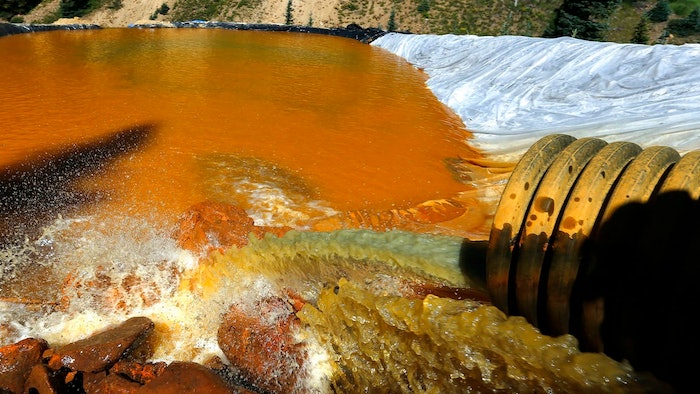 In this Aug. 14, 2015 file photo, water flows through a series of sediment retention ponds built to reduce heavy metal and chemical contaminants from the Gold King Mine wastewater accident outside Silverton, Colo. The U.S. Environmental Protection Agency is asking a federal court in New Mexico to toss out a lawsuit over a mine waste spill in Colorado that polluted rivers in three states.
AP Photo/Brennan Linsley, File

ALBUQUERQUE, N.M. (AP) — The U.S. Environmental Protection Agency wants a federal court to toss a lawsuit filed by Utah, New Mexico and the Navajo Nation seeking the repayment of cleanup costs for a mine spill in Colorado that polluted rivers in three states.

The EPA said in a motion Wednesday that the court doesn't need to intervene because crews are already working on the cleanup of water contaminated with heavy metals that was accidentally released from an EPA-monitored mine.

"Granting any relief in New Mexico, within the Navajo Nation, or in Utah would conflict and interfere with EPA's exclusive jurisdiction over its on-going response action activities and cleanup remedies," the federal government said in court documents filed in U.S. District Court in Albuquerque.

Utah is seeking $1.9 billion in damages from the EPA. The Navajo Nation filed a claim for $162 million, and the state of New Mexico is seeking $130 million.

The 2015 Gold King Mine accident in southern Colorado occurred at an inactive mine where polluted water had been accumulating for years before an agency crew accidentally released it during cleanup work.

The spill sent a yellow-orange plume of toxic heavy metals into rivers in Colorado, New Mexico, Utah and on Native American lands.

The EPA had no rules for working around old mines when agency workers triggered the spill, government investigators said in 2017.

New Mexico Attorney General Hector Balderas showed no signs of giving up on the lawsuit after the EPA's motion.

"We look forward to continuing our efforts to protect our water, environment and unique culture as we prepare our responses to these claims," Balderas spokesman David Carl said in a statement.

"But we do know that many Navajo people were negatively impacted in terms of their agriculture, livestock, and other means of providing for them and their families," Bates said. "There remains a need for accountability for the spill that occurred."

Costs of Mine Spill May Be Lower