Violence in Mexico Leads Mine to Scale Back Operations

A Mexico business council conceded that high levels of violence had become one of the greatest obstacles for economic activity. 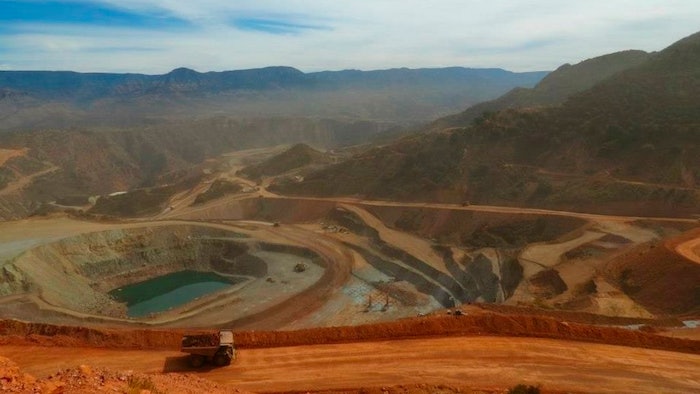 This 2012 courtesy photo shows a view from the Dolores mine, a gold and silver operation run by the Canadian company Pan American Silver, in Madera, Chihuahua. Since Tuesday, May 22, 2018, tension grew when some 400 employees, at least three foreigners among them, began fearing threats from organized crime bands.
AP Photo

MEXICO CITY (AP) — Canada's Pan American Silver Corp. said it is cutting back operations at its mine in northern Mexico due to safety concerns, the latest in a series of major businesses that have been frightened off by unsafe conditions in Mexico.

Company President Michael Steinmann said employees have had security incidents on roads leading to the mine in a remote part of Chihuahua state, a region plagued by drug cartels. Over the weekend, workers were holed up at the mine, afraid to leave because of threats by armed groups and some employees were evacuated on private planes.

"With the recent incidents that have occurred along the access roads, we have determined the prudent course of action is to suspend personnel movements to and from the mine until the roads are safe for our employees," Steinmann wrote.

The company said ore-stacking and processing at the open-pit mine are still operating.

In a statement Monday, Mexico's Business Coordinating Council complained that crime and violence had caused Pan American Silver and two other large companies to close plants.

The council said "the high levels of violence have become one of the greatest obstacles for economic activity."

The council also said that highway robberies of freight transport had doubled in the first quarter of 2018. And on Monday, the national railway regulatory agency said thieves were targeting train shipments, often by prying up pieces of track or blocking the rails.

"Crime is resulting in the loss of jobs in Mexico, and a deteriorating perspective for global investment in Mexico," the business council wrote.

Last week, one of Mexico's largest food products companies, Lala, announced that it had suspended operations at a distribution center in Ciudad Mante, in the northern border state of Tamaulipas, for security reasons since May 3.

Violence in Ciudad Mante has been blamed on fighting between factions of the Zetas known as the Northeast cartel and the Old School Zetas.

State prosecutor Irving Barrios said his office was investigating complaints from Lala and another company, Sello Rojo, about extortion attempts.

In April, Mexico's largest Coca-Cola bottler said it had indefinitely suspended operations in the city of Ciudad Altamirano, in southern Guerrero state, due to violence.

Coca-Cola FEMSA said it was closing the distribution plant in Guerrero state because in January employees there "began receiving constant threats and attacks by organized crime," a phrase that usually refers to drug cartels. It also cited a "recent unjustified attack" on one of its employees, but did not specify what happened.

FEMSA complained of "a lack of rule of law and the prevalence of impunity" in the area around Ciudad Altamirano.

The area near Guerrero's border with Michoacan state has long been dominated by drug gangs, most recently by the Knights Templar and La Familia cartels. The cartels frequently extort protection payments from smaller, family-owned businesses, but large multinational companies have sometimes been targeted as well.

In 2012, the Knights Templar cartel in Michoacan burned five warehouses and dozens of vehicles owned by the Sabritas snack company, a Mexican subsidiary of PepsiCo.