Donald Trump's assumption of the U.S. presidency couldn't come at a worse time for Mexico. 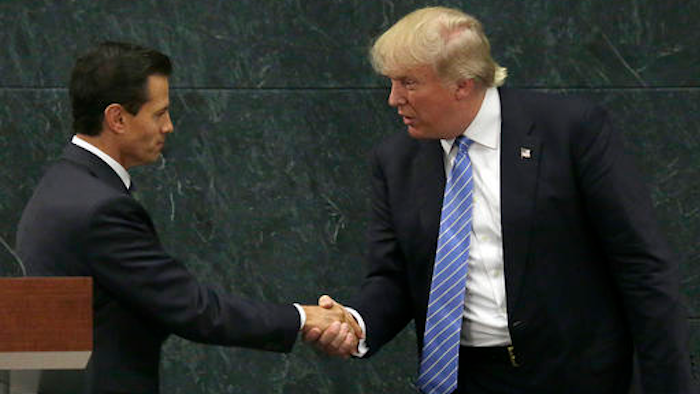 In this Aug. 31, 2016 file photo, Mexico's President Enrique Pena Nieto, left, and Republican presidential nominee Donald Trump shake hands after a joint statement at Los Pinos, the presidential official residence, in Mexico City. Before his swearing-in, Trump has already hurt Mexico's economy by pressuring automakers to shift factories out of Mexico and amid an uncertain economic outlook, the peso has plunged to all-time lows against the U.S. dollar.
AP Photo/Marco Ugarte, File

MEXICO CITY (AP) — Drug violence here is again on the upswing, the government has struggled to combat widespread corruption and nationwide protests have erupted after gasoline prices spiked this month amid the country's falling oil production and inability to produce all its own fuel.

Even before his swearing-in, Donald Trump has already hurt the country's economy by pressuring automakers to shift factories out of Mexico, threatening its most important manufacturing sector and status as a rising star in auto production. Amid an uncertain economic outlook, the peso has plunged to all-time lows against the U.S. dollar.

Now Trump takes office vowing to crack down on migrants, whom he famously denigrated as criminals and "rapists," and who send back remittances that inject billions of dollars into Mexico's economy. He has also threatened to impose tariffs on Mexican products, force Mexico to renegotiate the North American Free Trade Agreement and pay for a wall along the nearly 2,000-mile (3,145-kilometer) border.

"We have begun a year full of challenges and adversities," the Mexican Council of Bishops said in a statement Wednesday. "International economic crises are killing our economy, and the elections and political decisions of our neighbors have such an important impact on our country, but paradoxically we have no say in the matter."

Pena Nieto's approval rating fell to 12 percent this month, according to a Grupo Reforma poll. That coincided with a bump for the populist leftist politician Andres Manuel Lopez Obrador, whose Morena party led all others in the Reforma survey with 27 percent of respondents saying they would vote for it if the 2018 presidential election were held today. The poll had a margin of error of four percentage points.

Already two major manufacturers have abandoned Mexico expansion plans, and Trump has threatened General Motors and BMW with a border tax on vehicles built here. So far BMW has held fast to plans for a new Mexico factory, but GM announced that 450 new pickup truck axle-making jobs will be moved from Mexico to Michigan.

Ratings agencies have lowered the outlook for Mexico's debt, foreign direct investment is expected to suffer and the government has had to curtail spending and implement the fuel price hike, which sparked widespread protests and looting.

The looming crisis has broken down Mexicans into roughly three camps: a governmental and business elite that hopes for a pragmatic appeal to Trump's business background; farm groups that never liked NAFTA's huge imports of cheap U.S. grain and hope parts of the 1994 trade deal will be repealed; and another segment that wants its leaders to stand up to what Mexicans widely perceive as bullying by Trump.

"Mexican society has been frightened by the threats of a bully," said Eugenia Correa, an economist at the National Autonomous University of Mexico, who predicts some rocky months ahead. "The credit ratings are going to continue to fall, the foreign investments are not going to arrive, or they are going to wait."

Correa argued that, especially due to the incoming Trump administration's policy promises, Mexico needs to reduce dependence on the United States, by far its largest trade partner, by developing domestic oil refineries, farming and trade ties to other Latin American nations.

Some fear the possibility of a wave of returning migrants, either through deportations or people fleeing a hostile climate in the United States. So far, there have only been anecdotal reports of such "self-deportations," but an exodus of returnees could devastate the nearly $25 billion in remittances sent to the country each year.

Former Foreign Minister Jorge Castaneda said Mexico should be prepared to fight back. It could be less cooperative with the deportation process, for example, or halt its efforts to enforce its southern border and crack down on Central American migration bound for the United States.

"We don't have any reason to do the dirty work (of detaining migrants) for nothing, for a president who is no friend of Mexico," Castaneda said. He and others also say Mexico could stop aiding the United States in anti-drug operations.

Others like Victor Suarez, who launched a national farm cooperative movement in 1995, said grain imports made possible by NAFTA drove 6 million Mexican farmers and workers off the land. He sees a silver lining to renegotiating the trade deal.

He argues that NAFTA has hurt workers, farmers, unions and the environment in Mexico, the United States and Canada, and he would like to see protections put in place for Mexican corn, beans, rice and sugar against U.S. exports.

"We have been demanding the renegotiation of NAFTA since 1994," Suarez said. "We have always said it was badly negotiated and implemented even worse."

Mexico's government has said it wants to negotiate with Trump "as soon as possible."

Pena Nieto recently appointed Luis Videgaray, an acquaintance of Trump son-in-law Jared Kushner, to head the talks as foreign relations secretary. The bet is that Trump likes to strike deals.

"This is a man who has negotiated all his life," Videgaray said. "We have to be open to re-negotiating some points of NAFTA — to Mexico's advantage."

Violence Leads Mine to Scale Back

Mexico: Deported Can Help in Automotive