The fire prompted evacuations because of initial fears of exploding bullets. 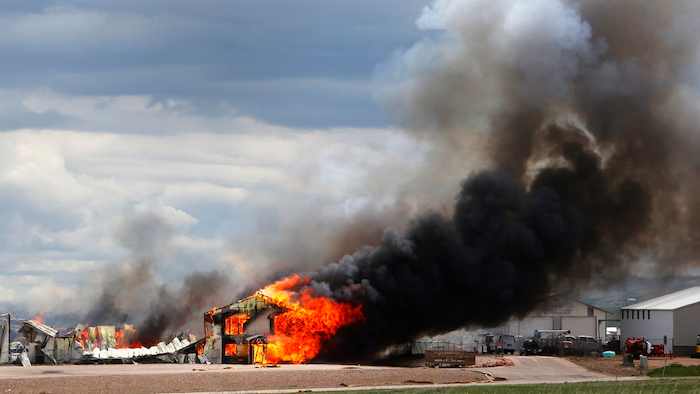 he Ultramax Ammunition company is engulfed in flames Tuesday, May 8, 2018, north of Interstate 90 and just east of Rapid City, S.D. Fire crews were worried about exploding ammunition and evacuated the area around the blaze.
Chris Huber /Rapid City Journal via AP

BOX ELDER, S.D. (AP) — A fire erupted Tuesday at a South Dakota ammunition plant where more than 2 million rounds of ammunition were stored, destroying the facility and prompting evacuations because of initial fears of exploding bullets.

The blaze was reported around 10:40 a.m. at the Ultramax Ammunition company in Box Elder, a city just east of Rapid City. No injuries have been reported, and firefighters for a time decided to stay back and allow the facility to burn. Authorities don't know what caused the fire.

Rapid City Fire Department spokesman Lt. Jim Bussell warned that smoke was still a hazard near the facility, which at one point was engulfed in flames and billowing black smoke. He said ammunition also continued to burn in a metal shipping container.

"I would say that the main threat has ceased," Bussell said late Tuesday afternoon. "There's still some danger with regard to the materials burning and ammunition still going off within that shipping container."

A phone number listed for Ultramax wasn't functioning. The company, which says on its website that it was created in 1986, calls itself a leading supplier in the ammunition industry.

Evacuations ordered for a nearby truck stop and other businesses were lifted a few hours after the fire erupted. No homes are in the immediate area, Bussell noted.

Some roads around nearby businesses were reopened Tuesday afternoon, though a stretch in front of the company remained closed because fire engines and other vehicles were working in the area.

Shawna Rames, an administrative assistant at a janitorial company about a half-mile drive from Ultramax, said she saw smoke, heard bullets going off and could smell the ammunition. Officials blocked the road to Rames' office, but employees there weren't evacuated, she said.

"I was more concerned about the fire department and the other personnel trying to battle it," Rames said. "It smelled like fireworks."

The Bureau of Alcohol, Tobacco, Firearms and Explosives will investigate because the building is an ATF-licensed facility.