The preliminary data from a test shipment of mock spent nuclear fuel that traveled from Spain to Colorado is showing promising results. 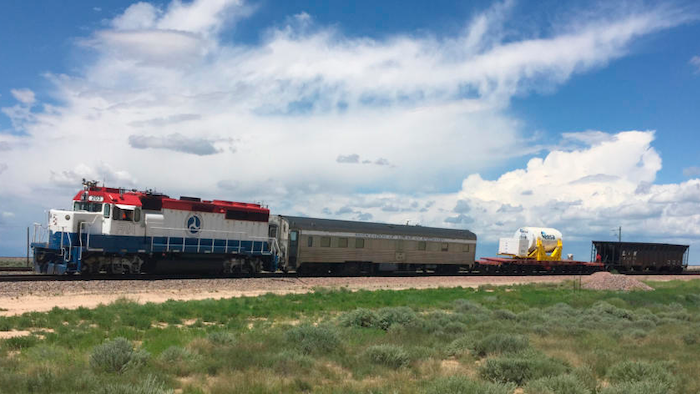 The cask underwent further testing at the Transportation Technology Center facility near Pueblo, Colo., at the end of the third leg of the journey.
Sandia National Laboratories

"We hope this will provide more assurances that the transportation of spent nuclear fuel is very safe," said Sylvia Saltzstein, manager of lab's transportation projects.

Three mock fuel assemblies were placed in a special cask outfitted with gauges to measure its movement while on a journey similar to what the material could go through to reach a storage facility.

A fuel assembly consists of about 300 metal tubes containing small uranium pellets. For the transportation test, the uranium was left out.

The cask, weighing about 330,000 pounds (151,000 kilograms), traveled from Spain by truck and barge to Belgium. The cask was then loaded onto a cargo ship to cross the Atlantic. After reaching Baltimore, it was transported by rail to the Transportation Technology Center Inc. facility near Pueblo, Colorado, where it underwent additional testing.

The cask was then shipped back to Spain by the same methods.

"Nothing even approaching being broken or damaged at all," Saltzstein said of the preliminary data.

Saltzstein said it will take several more months to fully analyze the data.

Holtec International is seeking to build an interim storage facility for such material near Carlsbad, New Mexico.