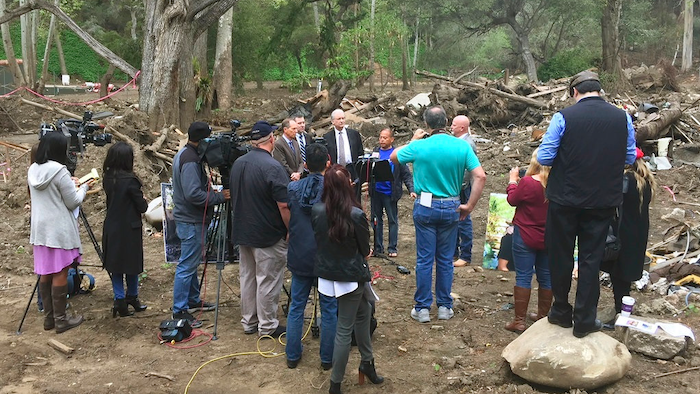 In this photo provided by G.F.Bunting survivor and co-plaintiff Lalo Barajas, center, whose partner Peter Fleurat was killed during devastating debris flows in January at their home, speaks at the site in Montecito, Calif, Thursday, March 29, 2018. Attorneys from left, Joseph Liebman, Geoff Spreter, Peter Bezerk, and Alex Robertson, right, announced the filing of a wrongful-death lawsuit by Barajas and Fleurat's siblings claiming Southern California Edison transformers ignited California's largest-ever wildfire in December. The suit says the blaze could have been prevented and the debris flows wouldn't have happened as a result.
Russ Stanton/G.F.Bunting via AP

LOS ANGELES (AP) — A California man whose partner was killed during devastating coastal mudslides in January is among residents suing a utility company, alleging its faulty equipment sparked a huge wildfire that stripped hillsides bare ahead of heavy rains that inundated their homes.

Lalo Barajas and Peter Fleurat were swept away when mud and boulders crashed through their house in Montecito during a powerful downpour that came on the heels of the Thomas fire, the state's largest-ever blaze. Barajas clung to a tree and waded through waist-high muck to escape the deluge with just cuts and bruises. Fleurat, his partner of nearly two decades, was found dead buried in mud the following day.

A wrongful death lawsuit filed Wednesday by Barajas and Fleurat's siblings claims faulty Southern California Edison transformers ignited the wildfire in December. The power company failed to mitigate the significant risk of fires stemming from its outdated equipment and tinder-dry growth surrounding its electrical poles near where the fire was sparked, the suit alleged.

"Had SCE acted responsibly, the Thomas Fire could have been prevented" and the debris flows would never have occurred when the rains came, according to a court filing.

A similar suit was also filed this week by a separate group of plaintiffs, including Carie Baker-Corey. The Montecito resident was swept away in the Jan. 9 debris flow along with her twin 12-year-old daughters Summer and Sawyer Corey and their 25-year-old half-sister Morgan Corey. Morgan and Sawyer were killed. Carie and Summer were critically hurt but survived.

Spokesman David Song said it would be premature for SCE to comment on the lawsuits.

"The Thomas fire has obviously had an impact on many individuals, but the origin and cause of the fire continue to be under investigation and no report has yet been issued. This and other lawsuits are not based on findings related to an investigation," Song said in a statement.

The findings of a multi-agency investigation into the cause of the Thomas fire have not been released.

Previous suits filed by more than 300 residents, ranchers, farmers and business owners also accuse SCE of negligence that led to the fire and subsequent mudslides.

The blaze northwest of Los Angeles covered more than 440 square miles (1,140 square kilometers) and destroyed more than 1,000 buildings. The flames scorched hillsides that were loosened when an intense storm moved through in the early hours of Jan. 9.

Barajas told The Associated Press on Wednesday that as the storm intensified their foothill home began rumbling and he could hear trees in the nearby creek "snapping like twigs."

When he saw their two cars rush by outside on a river of mud, he shouted to Fleurat to evacuate. That's when a floor-to-ceiling window shattered and huge rocks crashed into the house, he said. The pair jumped on a vanity to escape the rushing debris.

"I was shouting, 'Peter, Peter, Peter! Just stay on high ground!' Fifteen seconds later the whole house buckled and just took us into the mudflow," Barajas said, his voice shaking with emotion.

At a news conference Thursday, Baker-Corey recalled the moment she lost her grip on her daughter Morgan's hand after a debris flow "with boulders as big as cars" crashed through their house and swept them and her twin girls away.

"I asked God to let me live, and let them live," she said. Only Baker-Corey and her daughter Summer survived.

Barajas said he hopes his suit, which seeks unspecified monetary damages, will be a major step toward recovering from the devastation.