Allegations against GM are among the most serious. 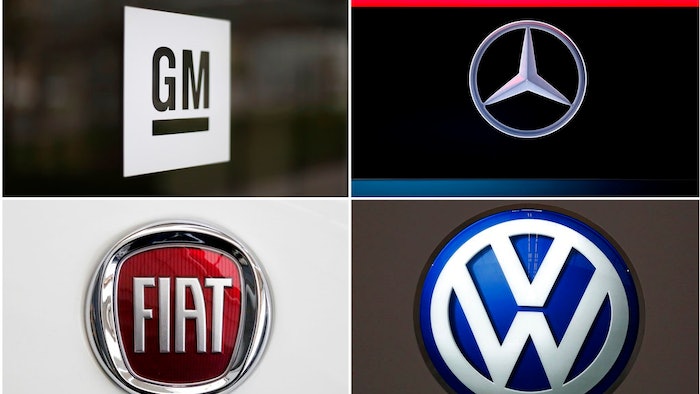 The lawsuits cite company documents obtained through previous legal actions against other automakers over faulty Takata inflators. The plaintiffs allege that automakers were informed of inflator defects during tests but delayed taking action. Allegations against GM are among the most serious. Takata documents showed that GM employees expressed concerns about inflators rupturing as early as 2003.

GM on Wednesday called the lawsuit "baseless and without merit" and said it misstates "a host of material facts." The company said it would defend itself vigorously. Mercedes-Benz called the allegations unfounded, and Fiat Chrysler declined comment, saying it had not been served with a copy. Messages were left Wednesday seeking comment from VW.

Takata uses the chemical ammonium nitrate to create small explosions to inflate air bags. But the chemical can deteriorate when exposed to high temperatures and airborne moisture. That causes it to explode with too much force, blowing apart a metal canister and hurling shrapnel. At least 22 people have died worldwide and more than 180 have been hurt.

The problem touched off the largest series of automotive recalls in U.S. history, with 19 automakers having to recall up to 69 million inflators in 42 million vehicles. The problem brought a criminal conviction and fine against Takata and forced the Japanese company into bankruptcy protection.

The lawsuits, which consolidate individual claims that were filed previously, allege that owners paid higher prices for their vehicles than they would have if the defect had been disclosed.

They allege that manufacturers picked Takata to supply inflators because the cost was less than other air bag makers who used different, less volatile chemicals as propellants. According to the lawsuits, manufacturers had employees who questioned the quality and performance of Takata's inflators well before any vehicles were recalled.

"These auto manufacturers were well aware of the public safety risks posed by Takata's airbags long ago, and still waited years to disclose them to the public and take action," Peter Prieto, lead counsel for the plaintiffs, said in a statement. The lawsuits "are an important step forward in holding them accountable."

In an April 2003 communication with Takata, GM was concerned about "ballistic variability," which is a tendency for the air bags to either underinflate or explode when deployed, the lawsuit against GM said. A GM engineer raised concerns about inadequate testing, moisture control and the inability of Takata to meet GM specifications after a 2003 visit to Takata's factory in Moses Lake, Washington, according to the lawsuit.

In 2004, Takata employees met with GM officials about a tendency for the inflators to shoot flames when they ruptured, and in March of 2006, Takata reported that inflators tested for GM vehicles continued to show "aggressive behavior," including the escape of "molten propellant" when they ruptured. A Takata employee admitted "we cannot get good results" with the inflator design, the lawsuit stated.

Yet GM didn't issue any recalls until June of 2014 when it recalled 29,000 Chevrolet Cruze compact cars from the 2013 and 2014 model years, according to the lawsuit. That recall came after Takata reported three exploding inflators in 2010. "Defendants did nothing to meaningfully investigate the problem, notify the appropriate regulators or notify the class (car owners)," the lawsuit stated.

GM also received reports of real-world problems in 2011 and 2014, including one case in which a Cruze driver was blinded in one eye by an exploding inflator, according to the lawsuit. GM and Takata blamed the trouble on a manufacturing problem instead of the deteriorating ammonium nitrate.

"Rather than publicize the truth, both Takata and New GM blamed the ruptures on a manufacturing problem," the lawsuit alleged.

GM said the Cruze recall isn't covered by Takata's recalls for deteriorating ammonium nitrate. The company says the Cruze recall was due to Takata inflators being built with an incorrect part.

Volkswagen, the lawsuit alleged, had repeated quality issues with Takata dating to 2003, even rejecting products after an audit. Yet no recalls were issued until 2016, the plaintiffs claimed. Daimler AG, maker of Mercedes-Benz vehicles, had concerns about the integrity of Takata inflators in 2003, according to company emails. In 2004, Mercedes engineers agreed to "forego key performance variables" and allow use of Takata inflators, the lawsuit stated. The company didn't do any recalls until 2016.

Fiat Chrysler didn't issue its first recall until 2014, even though its engineers expressed concerns about Takata inflators during the early 2000s, the lawsuit stated.