Takata agreed Wednesday to add up to 40 million air bag inflators to an already massive recall, raising questions about the auto industry's ability to produce and distribute the necessary replacement parts. 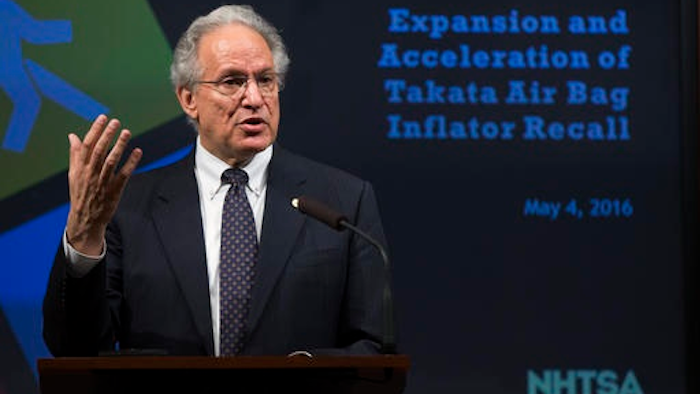 National Highway Traffic Safety Administration (NHTSA) Administrator Mark Rosekind speaks during a news conference at the Transportation Department in Washington, Wednesday, May 4, 2016, to announce that Takata has agreed to recall another 35 million to 40 million air bag inflators, a stunning increase that will more than double what already is the largest automotive recall in American history.
AP Photo/Evan Vucci

WASHINGTON (AP) — Prodded by the U.S. government, Takata agreed Wednesday to add up to 40 million air bag inflators to an already massive recall, raising questions about the auto industry's ability to produce and distribute the necessary replacement parts.

The recall of inflators that can explode with too much force and hurt people was already the largest in U.S. history at 28.8 million. But Wednesday's announcement could raise that number as high as 69 million, a staggering task that will strain overburdened manufacturers.

The expansion also entered Takata, automakers and the government's National Highway Traffic Safety Administration in a race against time. The government said the inflators have to be replaced before they reach six years old, when the risk of rupture increases.

Even before Wednesday's expansion, it would have taken until the end of 2017 for enough replacement parts to be manufactured, said Scott Upham, CEO of Valient Market Research in Philadelphia, which tracks air bag sales. He wasn't sure how many more years would be needed.

Other inflator manufacturers such as TRW Automotive, Daicel and Autoliv, which already are making replacement inflators, have agreed to join Takata to produce even more, Upham said.

"They're pitching in to the best of their ability, but even with their help, it's going to be very difficult to really ramp up production to cover this," he said.

Still, the government said, it will take until the end of 2019 to finish the recalls, fast enough to catch the suspect inflators before they can burst and spew shrapnel into drivers and passengers. At least 11 deaths and more than 100 injuries worldwide have been blamed on the Takata parts.

But two years after the big Takata recalls began, automakers have only replaced 28 percent of the recalled inflators due to a lack of replacement parts and difficulty in finding owners and persuading them to get cars repaired.

"We are absolutely not satisfied with the completion rates of the recalls already under way," Rosekind said, cautioning against moving too quickly. Inflators aren't interchangeable and must be engineered to fit a specific vehicle, which takes time, he said.

Yet he said the recalls were urgent and told people to get recalled vehicles fixed as soon as parts are available.

"The science now clearly shows these inflators can become unsafe over time," he said, referring to evidence that chemicals in the devices can degrade, especially when exposed to heat and humidity.

The models involved in the expanded recalls and the number of cars affected were not available Wednesday but will be posted within weeks on NHTSA's website. The expansion adds three manufacturers — Tesla, Jaguar-Land Rover and Fisker — to the 14 that already have vehicles in the recall.

The expansion will be phased in between now and December 2019, with older cars and those in areas of high heat and humidity getting priority, the agency said.

Takata uses ammonium nitrate to create an explosion that inflates air bags in a crash. But over time and when exposed to airborne moisture and high temperatures, the chemical can degrade and burn too fast, blowing apart a metal canister and spewing shrapnel.

It takes a minimum of six years for the chemical to become unstable in high humidity regions, NHTSA officials said. As cars age, the risk grows, especially in areas where temperatures frequently cycle from cool to hot. Six years is a conservative estimate, and the replacement schedule is aimed at getting vehicles fixed before they are old enough to risk a rupture, the officials said.

But Sen. Bill Nelson, a Florida Democrat, said the recalls still aren't being done fast enough. "If we wait another three or four years for these to get replaced, more people are likely to die," he said.

Inflators with the drying agent have not been recalled because none has ruptured due to problems with ammonium nitrate, NHTSA said. There was one rupture, but it was due to a manufacturing problem with the canister, the agency has said. Side air bags are designed differently and are far less risky, they said.

Takata said it knows of no ruptures in the batch of inflators that have been added to the recalls, nor does it know of any new data "that suggests any substantial risk with respect to such vehicles."

Still, Takata said, it agreed to the expansion out of a shared interest in safety.

Rosekind praised Takata's conduct in the latest recall, saying it appears the company "may be turning the corner toward a stronger and more effective safety compliance culture."

The additional recalls come as authorities in Malaysia investigate two more recent deaths in cars with Takata air bags that ruptured. Honda says the inflators spewed metal fragments in the crashes, but the cause of the deaths has not been determined.

The pandemic forced the company to postpone the sales event from July.
Sep 28th, 2020

More than 300,000 merchant mariners are trapped at sea because of coronavirus restrictions.
Sep 25th, 2020

The world is shifting to a less wasteful, circular economy. Here’s how manufacturers can capitalize.
Sep 16th, 2020
Follow Us
Most Recent