A Look at Regulations Sidelined Under Trump

The Transportation Department has withdrawn, repealed, delayed or put on the back burner at least a dozen significant safety rules. 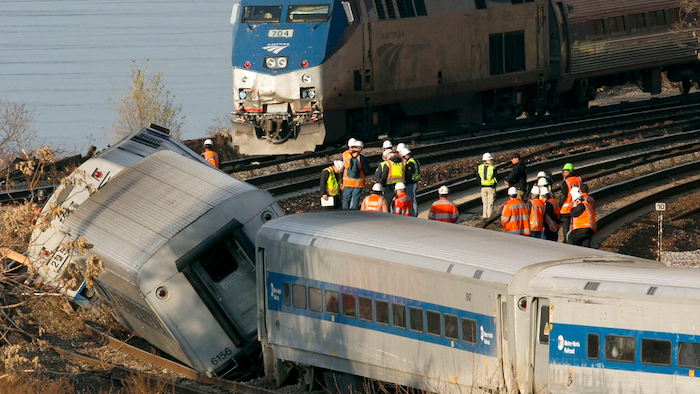 In a Dec. 1, 2013, file photo, an Amtrak train, top, traveling on an unaffected track, passes a derailed Metro North commuter train, in the Bronx borough of New York. President Donald Trump is putting the brakes on attempts to address dangerous transportation safety problems from speeding tractor-trailers to sleepy railroad engineers as part of his quest to roll back regulations across the government.
AP Photo/Mark Lennihan, File

President Donald Trump says his administration has ended more unnecessary regulations than any previous administration. In response to his orders, the Transportation Department has withdrawn, repealed, delayed or put on the back burner at least a dozen significant safety rules, according to an Associated Press review of the department's regulatory actions over the past year.

A look at some of those regulations:

—A 2016 proposed rule to require new cars and light trucks be able to communicate wirelessly with each other to avoid collisions, one of the most promising technologies for reducing traffic fatalities, is languishing. The White House has moved the proposal from its list of active rulemakings to its long-term agenda, which means no action is expected before the end of the federal fiscal year on Sept. 30, if at all. The National Highway Traffic Safety Administration has said it is still reviewing public comments on the proposal and no final decision has been made.

—A rule adopted in 2016 in response to a congressional directive requires that new hybrid and electric vehicles emit sounds when traveling at low speeds to alert pedestrians and cyclists to their approach. The government estimates the rule would prevent 2,800 injuries over the life of each model year of the vehicles.

Ten days after Trump took office, two auto industry trade associations petitioned DOT for an extra year to comply with the rule. The deadline for full compliance with the rule was Sept. 1, 2019, but in a notice posted online over the weekend DOT said is granting the request for an extra year, among several other changes sought by automakers. The new compliance date is Sept. 1, 2020.

—The White House moved a 2016 proposal to require software in new heavy trucks be set to limit speeds from its list of active rulemakings to its long-term agenda. DOT studied maximum speeds of 60, 65 and 68 mph. About 1,100 people are killed annually in crashes involving heavy trucks on roads with speed limits exceeding 55 mph.

The American Trucking Associations, an industry trade group, has claimed credit for stalling the rule, saying it would create dangerous speed differences between cars and trucks. DOT says it has limited resources and higher priorities.

—DOT has withdrawn a rule it was in the early stages of writing to require that states annually inspect commercial buses and other passenger-carrying vehicles. Since 1990, there have been more than 220 commercial bus crashes and fires resulting in at least 484 deaths and 4,618 injuries, according to Advocates for Highway and Auto Safety, which tracks crashes through media reports.

The Obama administration proposed the rule in response to a congressional directive. Twenty-two states already conduct annual inspections, but some states say they can't afford an inspection program. The withdrawal notice said there isn't enough data to support the need for inspections.

—A rule proposed in 2015 would expand safety requirements for oil and natural gas pipelines, including greater reporting, inspections of pipelines within 72 hours of an extreme weather event or natural disaster, more frequent inspections using tools that can look inside pipes, and greater use of leak detection systems.

The proposal was a response in part to a 2010 gas transmission line explosion and fire in the San Francisco suburb of San Bruno, California, that killed eight people, injured many more and destroyed or damaged more than 100 homes.

A final rule was one step away from becoming law when Trump took office. It was returned to the Pipeline and Hazardous Materials Safety Administration, or PHMSA, three days later. DOT says it's reviewing the rule because of concerns raised by "important stakeholders."

Pipeline operators have long urged the government to eliminate the class system, which sometimes forces operators to make expensive upgrades in areas where population density has increased.

DOT says the changes won't compromise safety. But a 2016 PHMSA report to Congress recommended against changing or scaling back the class system based in part on extensive public and industry comments.

PHMSA issued the rule in response to a massive methane gas leak from the Aliso Canyon natural gas storage facility northeast of Los Angeles. The leak began in late 2015 and wasn't fully stopped until February 2016. More than 11,000 people were displaced from their homes and many residents reported health effects.

The rule requires industry to follow the American Petroleum Institute's recommended practices for the design and operation of underground natural gas storage facilities. The gas industry wants portions of the rule to be voluntary guidance, rather than mandatory regulations, and they want up to eight years instead of one year to fully implement the rule. PHMSA has said it won't enforce the portions that have drawn industry opposition while it is reconsidering the rule.

—An interim final rule banning shipments of rechargeable lithium batteries on passenger planes was one step away from becoming law when Trump took office. Three days later, the rule was returned to PHMSA.

U.S. testing has shown the batteries can self-ignite, creating fires capable of destroying an airliner. The rule would harmonize U.S. regulations with international safety standards. It would also limit batteries shipped on cargo-only planes to a maximum 30 percent state of charge. The changes were opposed by the battery industry and some manufacturers of products that use batteries.

DOT says the rule was "pulled back" because of concern about its impact on rural areas, but a new version is expected this spring. Industry lobbyists have complained the rule might prevent battery shipments on smaller planes flying to remote areas. Safety advocates say the destination doesn't change the risk.

—DOT has withdrawn an early-stage rule to require train engineers and commercial truck and bus drivers be screened for sleep apnea. The National Transportation Safety Board, which recommended the screening, has identified untreated sleep apnea as a cause of at least 13 accidents it has investigated, including three commuter rail crashes in New York and New Jersey since 2013 and a collision between a commercial bus and a tractor-trailer that killed 13 people and injured 31 others near Palm Springs, California, in 2016.

DOT said the problem is being addressed through current programs and through a proposed rule on fatigue risks in the railroad industry. The fatigue rule is years overdue. NTSB officials say DOT's approach isn't working because sleep apnea-related crashes continue to occur.

—A final rule requiring all trains have at least two crew members was sent to the White House for approval in December 2016. The rule was sent back to the Federal Railroad Administration six days after Trump's inauguration. It has since been moved from the White House list of active rulemakings to the long-term agenda.

The proposal was prompted in part by a 2013 derailment in which a runaway oil train improperly secured by a lone engineer careened into in a Canadian town, igniting a fierce fire that killed 47 people. Most trains already have two crew members. Freight railroads, which want to keep open the option of single-person crews as trains become more automated, oppose the rule.

—DOT has repealed a 2015 rule requiring train cars that haul highly flammable crude oil be equipped with advanced braking systems that stop tank cars simultaneously. Most trains use conventional air brakes that stop cars one after the other.

—Responding to a congressional directive, the railroad administration issued a rule in 2016 requiring commuter and intercity passenger railroads to identify their safety risks and create a plan to manage those risks.

The Trump administration has delayed the rule's requirements five times, most recently through Dec. 4, in response to petitions from some states. The states have complained that they shouldn't be required to develop safety programs for railroads they sponsor, but don't operate themselves. DOT says the delay will save railroads money and give the agency time to work out concerns raised about the rule.