Improvements coming to the aging sewage treatment plant responsible for a stinky black discharge at the base of Niagara Falls. 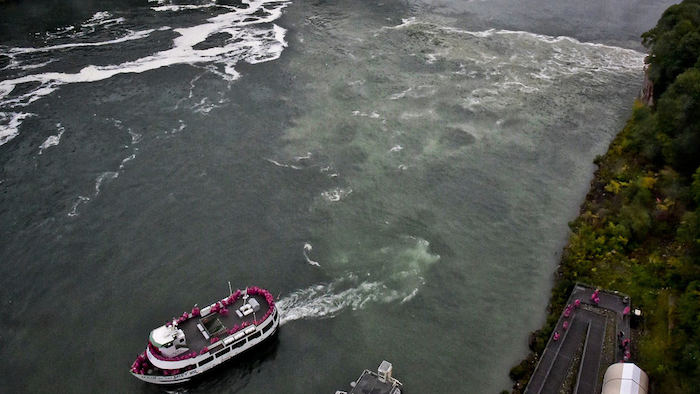 In this Oct. 9, 2017 file photo, a tour boat travels along the Niagara River in New York, where a series of overflow discharge from a treatment plant have drawn widespread attention. The sewage treatment plant that spewed a smelly black discharge at the base of Niagara Falls during the busy summer tourist season is in line for $20 million in upgrades. Gov. Andrew Cuomo proposed the state investment Tuesday, Dec. 19 as one of his 2018 priorities.
James Neiss /The Niagara Gazette via AP, File

NIAGARA FALLS, N.Y. (AP) — The aging sewage treatment plant responsible for a stinky black discharge at Niagara Falls over the summer is in line for an overhaul.

New York Gov. Andrew Cuomo on Tuesday proposed spending $20 million to begin improvements at the Niagara Falls Wastewater Treatment Facility. He will include the plan in his 2018 State of the State address.

"The impacts of our aging water infrastructure became intolerable this year after multiple discharges discolored the pristine waters at Niagara Falls," Cuomo said in a statement.

His proposal also includes $500,000 for two engineering studies meant to guide the upgrades.

The state fined the Niagara Falls Water Board $50,000 after discolored water spewed into the Niagara River and enveloped the Maid of the Mist tour boat dock in view of tourists July 29.

The discharge was largely blamed on human error but focused attention on the 40-year-old facility's inability to handle the volume of sewer and storm water it receives. Several overflows have been discharged into the river since the July 29 episode, which was investigated by the state Department of Environmental Conservation.

"What happened in Niagara Falls was a big wake-up call for a lot of people," said Elizabeth Moran, water and natural resources director for Environmental Advocates of New York. The group has called for $800 million in grant funding in this year's budget to begin to meet infrastructure needs statewide.

"I think before Niagara Falls hit national news, a lot of people didn't realize that sewage overflow events are actually something that plague not just Niagara Falls but all of New York and many areas throughout the country," Moran said.

The Niagara Falls Water Board has said the July discharge happened when workers at the treatment plant let a pump run for too long while emptying a basin that contained residue from the cleaning of carbon filters.