The giant passenger jet converted to fight wildfires was grounded this year by U.S. officials.

Keith Ridler
This May 5, 2016, file photo provided by Global Supertanker Services shows a Boeing 747 making a demonstration water drop at Colorado Springs Airport in Colorado Springs, Colo. The giant passenger jet converted to fight wildfires but grounded by U.S. officials during much of this year's fire season could be aloft much more next year. The U.S. Government Accountability Office on Thursday, Nov. 9, 2017, sided with Global SuperTanker Services in its protest against the U.S. Forest Service. The Colorado-based company challenged the Forest Service's 5,000-gallon (19,000-liter) limit on air tankers that kept the 19,000-gallon (72,000-liter) Boeing 747-400 idle until late August. After that it flew only in California.
Hiroshi Ando/Global Super Tanker Services LLC via AP, File

BOISE, Idaho (AP) — A giant passenger jet converted to fight wildfires was grounded this year by U.S. officials during much of what turned out to be an especially destructive U.S. fire season, but it could be flying much more next year.

After that, the Boeing 747-400 flew only in California in a deal with the state.

Ahead of wildfire season, the Forest Service offered firefighting contracts that limited the size of air tankers, saying a plane as big as the 747 isn't suited for initial attacks on wildfires. That's a key Forest Service strategy — putting out blazes before they get big.

The accountability office rejected that, saying "the majority of the agency's arguments are based upon anecdotal evidence and not supported by the record."

Officials recommended that the Forest Service revise its size limits for air tankers and reimburse the company for costs involved in challenging the agency.

The company has long argued that the aircraft can fly low over rough terrain, make multiple drops on one flight and reach wildfires in the U.S. West in less than three hours.

The Forest Service said it's complying with the decision.

"We are reviewing our documentation," Jennifer Jones, a Forest Service spokeswoman said in a statement. "After the review is completed, the agency will determine the most appropriate ways to continue to procure large and very large next generation airtankers."

U.S. officials considered the 747's firefighting abilities over the summer as the National Interagency Fire Center in Boise raised the threat from wildfires nationwide to its highest level. Regions in the U.S. had started competing for limited resources.

The center says that through Monday, about 14,000 square miles (36 million square kilometers) have been scorched this year, a 43 percent increase over the 10-year average.

The 747 got approval by late August to fly in California, where it helped battle wildfires in the northern part of the state that killed 43 people and destroyed nearly 9,000 homes and other buildings.

The California Department of Forestry and Fire Protection didn't return a call from The Associated Press. Global SuperTanker officials said the aircraft made 60 drops and spread 725,000 gallons (2.7 million liters) of retardant in the state.

The aircraft, called the Spirit of John Muir after the famed naturalist, is at McClellan Air Force Base near Sacramento, California, but will soon head to Marana, Arizona, for maintenance and preparations for firefighting duties in South America and Australia if needed, the company CEO said.

"I fully expect that the fire season is going to be pretty vicious in the Southern Hemisphere, like it was in California this year," Wheeler said. 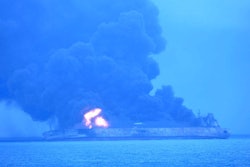 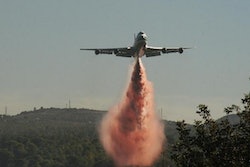 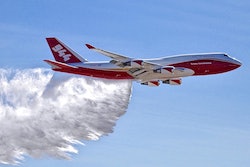