The review should pinpoint any needed upgrades in the half-century-old structure. 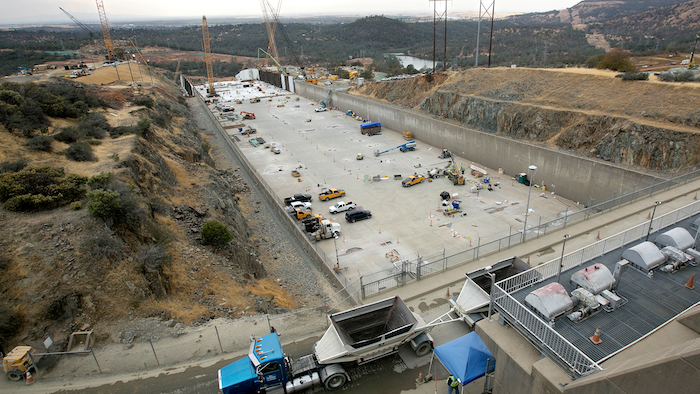 In this Oct. 19, 2017 file photo, work continues to repair the damaged main spillway of the Oroville Dam in Oroville, Calif. California is launching an overall safety review of the nation's tallest dam to pinpoint any needed upgrades or repairs in the half-century-old dam, water officials said Wednesday, Nov. 1, 2017. An independent national panel of dam-safety experts had called for that kind of overarching review at Oroville Dam in September following last winter's collapse of the dam's two spillways.
AP Photo/Rich Pedroncelli, File

SAN FRANCISCO (AP) — California is launching an overall safety review of the nation's tallest dam to pinpoint any needed upgrades in the half-century-old structure, water officials said Wednesday, launching the kind of overarching review called for by an independent national panel of experts in September following the collapse of two spillways at Oroville Dam.

Experts from the national Association of State Dam Safety Officials and the U.S. Society on Dams concluded that state officials would have been able to catch the problems that led to the collapses if they had reviewed the 1960s' design and construction of the dam using modern engineering standards.

Federal, state and private experts will work on the comprehensive review of the 770-foot (235-meter) dam, said Joel Ledesma, deputy director of the State Water Project at the California Department of Water Resources, which operates the structure.

Authorities ordered nearly 200,000 people downstream of the dam to evacuate in February when both spillways suddenly began crumbling. The feared uncontrolled releases of water over the dam did not occur, and authorities allowed residents to return to their homes within days.

Water agency director Grant Davis said crews have now completed the first phase of repairs to the damaged main spillway, ensuring it can be used to release water from the reservoir if needed during the coming winter rainy season.

Davis called the fast-paced repairs of recent months "a stunning feat," but acknowledged the fears of residents who fled from the path of the dam last winter.

"You indeed had a terrifying experience, and we are working hard to see this never happens again," Davis said.

State officials say emergency and subsequent repairs have so far cost at least $640 million but not all costs have been identified yet. Authorities hope federal emergency funds will cover up to three-quarters of the overall cost.

Results of an investigation into the causes of the spillway collapses are expected sometime later this month, the water agency said.