Update: 6 Killed in Coal Mine Collapse

Rescuers are trying to reach one other mine worker who is still trapped inside. 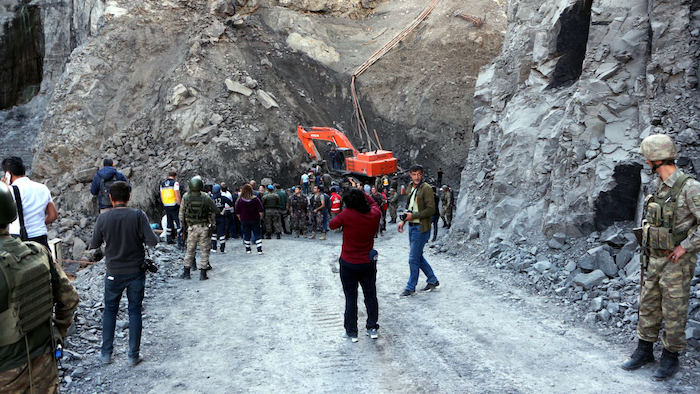 Turkish soldiers stand guard as rescue workers work after six miners were killed inside a collapsed coal mine in Sirnak in southeast Turkey, Tuesday, Oct. 17, 2017. The private Dogan news agency said the incident occurred Tuesday in the province of Sirnak, near Turkey's borders with Iraq and Syria. The cause of the accident was not immediately known.
DHA-Depo Photos via AP

ANKARA, Turkey (AP) — A coal mine collapsed in southeast Turkey on Tuesday, killing at least six miners. Rescuers were trying to reach one other mine worker who was still trapped inside.

The mine located in the province of Sirnak — bordering Iraq and Syria — caved in trapping eight workers, the private Dogan news agency reported. Seven of them were rescued but six of them died while hospitalized.

The cause of the collapse wasn't immediately known.

Turkey's energy ministry said meanwhile, that the mine was unlicensed and operating illegally.

In 2014, 301 miners were killed in a fire inside a coal mine in Soma, western Turkey — the nation's worst mining disaster. The tragedy exposed poor safety standards and superficial government inspections in Turkey's mines. 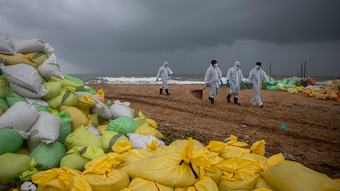 The evacuation order for those within 1 mile of the fire remained in effect as of Wednesday night.
Jun 17th, 2021

Why Ransomware Is a Major Threat to Manufacturing

Cybercriminals are drawn to the most vulnerable and profitable sectors.
Jun 16th, 2021

An employee wielding a handgun fatally shot two people and wounded two others before killing himself.
Jun 16th, 2021

Study: Half of US Cosmetics Contain Toxic Chemicals

Some of the highest PFAS levels were found in waterproof mascara and long-lasting lipstick.
Jun 16th, 2021

But the protective envelope on about five of the reactor’s 60,000 fuel rods is damaged, the ministry said.
Jun 16th, 2021

Nuclear experts suggested that gas might be leaking from fuel rods inside the reactor.
Jun 15th, 2021

Seventy employees were safely evacuated at Chemtool, the largest manufacturer of grease in the Americas.
Jun 14th, 2021
Follow Us
Most Recent