Witnesses say the gunman, Adam Purinton, yelled at the two Indian men to "get out of my country" and opened fire. 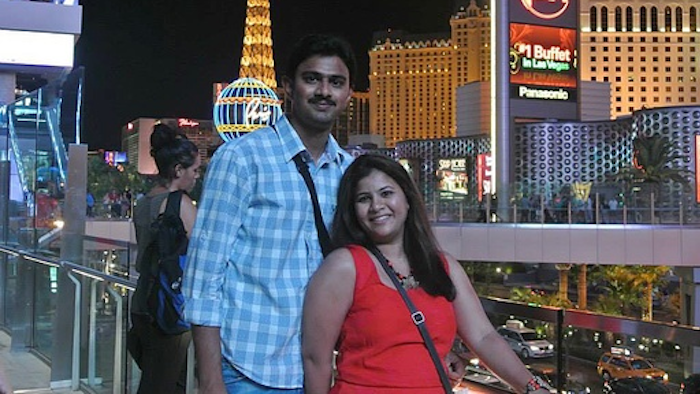 Srinivas Kuchibhotla, left, poses for photo with his wife Sunayana Dumala in Las Vegas. In the middle of a crowded bar, a 51-year-old former air traffic controller yelled at two Indian men - Kuchibhotla and Alok Madasani - to "get out of my country," witnesses said, then opened fire in an attack that killed one of the men and wounded the other, as well as a third man who tried to help, Thursday, Feb 23, 2017, in Olathe, Kan.
Kranti Shalia via AP

OLATHE, Kan. (AP) — GPS device-maker Garmin long has revered diversity in its workforce, even when the locale of its ever-sprawling operational headquarters — a largely white Kansas City suburb — didn't reflect it.

It's the place 32-year-old Srinivas Kuchibhotla came to work a few years ago. By his wife's account Friday he willingly spent long hours on an aviation systems engineering team alongside Alok Madasani, a friend and colleague also 32 and from India.

Kuchibhotla's trek led him to have a kinship with his boss, Lebanese native Didier Popadopoulos, who says he moved to America at Kuchibhotla's age and once held the same Garmin job.

But Garmin — a billion-dollar tech giant launched in Kansas as a startup by two men nearly three decades ago — now is reeling, trying to digest Kuchibhotla's shooting death Wednesday at a bar just a mile down the road from work. Madasani was wounded, along with a stranger who tried to help.

Witnesses say the gunman, Adam Purinton, yelled at the two Indian men to "get out of my country" and opened fire. Purinton, who was arrested hours later at a bar in Missouri, remains jailed on murder and attempted murder charges.

The shooting happened at a time when many have concerns about the treatment of immigrants in the U.S., some of whom feel targeted by the current administration. President Donald Trump has promised to ban certain travelers and been especially vocal about the threat posed by Islamic terrorist groups.

On Friday, Garmin tried to comfort grieving employees at a closed-door vigil inside the auditorium on its campus in Olathe, Kansas. Kuchibhotla's widow, Sunayana Dumala, addressed the group of about 200 workers that included Madasani, who was released from the hospital Thursday.

Laurie Minard, Garmin's vice president of human resources, doesn't believe the shooting will jeopardize its recruitment of workers from overseas.

"We tend to be a family here," she said at the Garmin campus, which is waging a $200 million expansion, with plans announced last August for a new manufacturing and distribution center. "We want people to feel safe. We embrace it. We encourage it. We support it. It's extremely important to us about acceptance."

At any given time, she said, more than 100 Garmin employees are in the H-1B program, which lets American companies bring foreigners with technical skills to the U.S. for three to six years.

In an eight-year period until fiscal year 2016, Garmin on average obtained 49 certifications for foreign labor — a prerequisite for hiring with an H-1B visa — for an average of 70 positions, according to the U.S. Department of Labor. During that time, 81 percent of the certified positions were in Olathe, the Labor Department says.

Olathe, whose name means "beautiful" in the Shawnee language, is a well-to-do Kansas City suburb where the median household income is above $77,000 a year.

Worldwide, Switzerland-based Garmin Ltd. — the Kansas operation's corporate parent — has more than 11,400 workers in 60 offices and last year logged $3.02 billion in revenue. Roughly 2,800 workers are at the Kansas headquarters, which Greater Kansas City Chamber of Commerce spokeswoman Pam Whiting cast as regionally "one of our entrepreneurial success stories" and biggest employers.

Recruiting from overseas isn't at all unusual in the tech industry, which contends there aren't enough Americans with specialized skills the companies need.

Indian immigrants in the U.S. has spiked from about 200,000 in the 1980s to more than 2 million today, as Indian-born scientists and engineers fueled the American tech boom. India received more H-1B visas in the U.S. for its temporary high-skilled workers, about 70 percent, than any other country in 2014.

Stunned by Kuchibhotla's death, Popadopoulos, the Lebanese native who was the man's boss, said he plans to stay the course.

"When this happened, one of the things I started to think about with my wife (was) 'Is it time to leave?'" he said.

Then he thought: "Leave where? I'm from here. I really think Srinivas would want us to stick together and stand up for what's right."

U.S. Sen. Jerry Moran said he left a message with Olathe's mayor, offering to help assure people from India who live in Kansas that the actions leading to Kuchibhotla's death are "not the norm."

"This is not the nature of Kansas, and we welcome people to the United States, particularly a company like Garmin and many others," the Kansas Republican said.