The nation's largest public utility, which powers 9 million customers, says it has abided by the law and hasn't sullied drinking water sources. 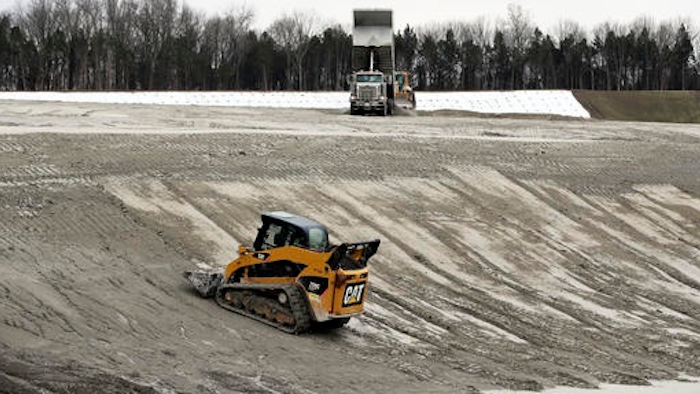 In this Jan. 25, 2017 photo, heavy equipment is used at an ash storage site at Gallatin Fossil Plant in Gallatin, Tenn. Environmental groups are taking the Tennessee Valley Authority, the nation's largest public utility, to trial over whether waste from the coal-fired power plant near Nashville polluted the Cumberland River. A trial opens Monday, Jan. 30, in federal court in Nashville as the groups claim coal ash waste illegally seeped into the Cumberland River.
AP Photo/Mark Humphrey

NASHVILLE, Tenn. (AP) — Environmental groups are taking the Tennessee Valley Authority to trial over waste ash from an aging coal-fired power plant northeast of Nashville, saying it polluted the Cumberland River in violation of the Clean Water Act.

In a bench trial starting Monday in federal court in Nashville, the Tennessee Clean Water Network and Tennessee Scenic Rivers Association say the pollution is due to the TVA's faulty storage of coal ash, a byproduct of burning coal for energy.

The nation's largest public utility, which powers 9 million customers in parts of seven Southern states, says it has abided by the law and hasn't sullied drinking water sources.

But the environmental groups contend coal ash storage ponds at the 1950s-era Gallatin Fossil Plant have been illegally seeping toxic pollutants into the groundwater and the Cumberland River for years. The groups also say in the lawsuit filed in 2015 that state regulators didn't require sufficient changes at the plant to safeguard against contamination, according to court documents.

The plant sits on a bend of the river, which stretches almost 700 miles from eastern Kentucky headwaters through Tennessee to meet up with the Ohio River in western Kentucky. Nearby residents have private wells and the Cumberland River supplies drinking water to Nashville, about 40 miles away, among other areas.

In 2015, state environmental officials informed Albert Hudson, whose home is near the plant, that his well water met U.S. Environmental Protection Agency drinking water standards. But they also said the water showed levels of the harmful chemical hexavalent chromium — typically resulting from an industrial process — were slightly above EPA risk levels.

The Southern Environmental Law Center, representing the other environmental groups, cites test of two water wells — including Hudson's — in court documents along with results that found the chemical in the Cumberland River near where the plant takes in water.

Hudson is slated to testify for the environmental groups.

At certain levels, the chemical has been found to cause cancer in lab animals when they drink it in water, according to the National Institutes of Health and the EPA.

Additionally, he said, the utility tested Hudson's well again and it met drinking water standards for Tennessee, save for unrelated fecal coliform. He also said there are other potential sources of the hexavalent chromium, including natural occurrences.

Trial is expected to last about a week.

The environmental groups say toxins are being spread to groundwater and the river via numerous area sinkholes. The TVA disputes that those are, in fact, sinkholes and continues to investigate the geology of the area.

The utility also says it's investing billions of dollars in safer ways to store coal ash and other waste from burning coal across its operations.

That includes converting all of its wet coal-ash storage to dry storage, a decision made after a 2008 coal ash disaster at TVA's Kingston Fossil Plant. More than 5 million cubic yards of sludge from the plant spilled into the Emory and Clinch rivers that year, destroying homes in a nearby waterfront community.

"The Kingston failure happened in an instant," said Beth Alexander, a Nashville-based attorney of the Southern Environmental Law Center. "But the Gallatin failure has unfolded over years, out of sight."

TVA is awaiting the outcome of the state and federal cases before determining how to store the coal ash in the long term. One option the environmental groups prefer is excavating the site and sending ash to dry, lined landfills — a proposal TVA has said could be costly and not potentially any more environmentally friendly than storing ash onsite where the utility can monitor it.

"We all agree that protecting our environment is a top priority," Brooks said. "TVA is committed to environmental stewardship and has a mandate to act with the interest of our 9 million consumers of TVA power in mind ... The plaintiffs appear to have a much more narrow focus."