The move is based on President Donald Trump's comments on nuclear weapons and climate change. 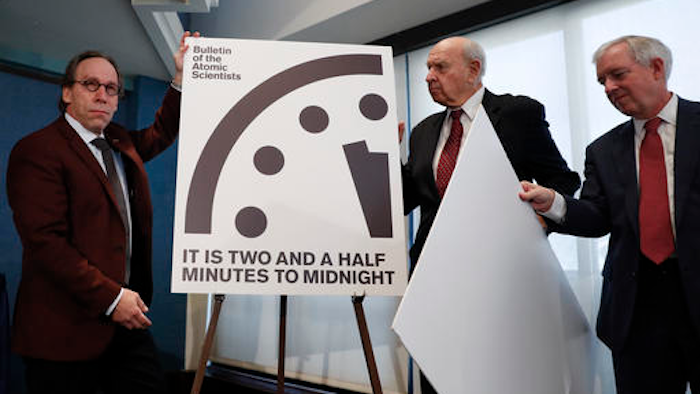 From left, Lawrence Krauss, theoretical physicist, chair of the Bulletin of the Atomic Scientists Board of Sponsors; Thomas Pickering, co-chair of the International Crisis Group; and David Titley, a nationally known expert in the field of climate, the Arctic, and national security, unveil the Doomsday Clock during a news conference at the National Press Club in Washington, Thursday, Jan. 26, 2017, announcing that the Bulletin of the Atomic Scientist have moved the minute hand of the Doomsday Clock to two and a half minutes to midnight.
AP Photo/Carolyn Kaster

WASHINGTON (AP) — The keepers of the Doomsday Clock have moved the symbolic countdown to potential global catastrophe 30 seconds closer to midnight based on President Donald Trump's comments on nuclear weapons and climate change.

The Bulletin of the Atomic Scientists, in a statement accompanying the move Thursday, cited "wavering public confidence in the democratic institutions required to deal with major world threats." It says "deception campaigns" by Russia to disrupt the U.S. election have made the world more dangerous by bringing "American democracy and Russian intentions into question."

The Doomsday Clock now stands at 2 ½ minutes to midnight, the closest it has been since the 1950s.

The clock is a visual representation of how close the Bulletin believes the world is to catastrophe brought on by nuclear weapons, climate change and new technologies.