Both injuries occurred on molding machines, and OSHA blame the incidents on a lack of adequate safety guards and procedures.

In less than 10 days in 2016, two employees at a Green Bay muffler component manufacturer suffered severe injuries as they operated machinery without adequate safety guards and procedures in place, federal workplace safety investigators have determined.

Based in Green Bay, the Bay Family of Companies operates 40 corporations that produce a variety of insulation products used in the industrial and automotive industries.

On Jan. 18, 2017, the U.S. Department of Labor's Occupational Safety and Health Administration issued one willful, one repeated, one other-than-serious violation and two serious violations to Bay Fabrication. The company now faces $219,242 in proposed penalties.

Investigators determined a worker had his left hand crushed on July 21, 2016, by a molding machine, when the tamp head smashed his hand as he removed a mold from the machine. OSHA found the machine's safety interlock on the door guarding the operating parts was damaged and not functional properly which disabled the safety guard and led to the injury.

On July 30, 2016, another worker suffered the partial amputation of his left middle finger. In this instance, investigators found the molding machine cycled and caught his finger in an unguarded pinch point. They determined the machine was not locked out as required.

"The fact that two workers suffered debilitating injuries is tragic. The reality is that the company failed to re-evaluate its machine safety procedures and continued to expose other workers to the same hazards even after these injuries," said Robert Bonack, OSHA's area director in Appleton. "Adequate and properly installed machine safety guards and lockout/tag out procedures must be in place to prevent workers from coming in contact with operating parts." 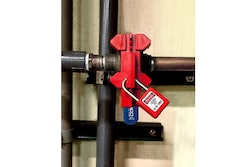