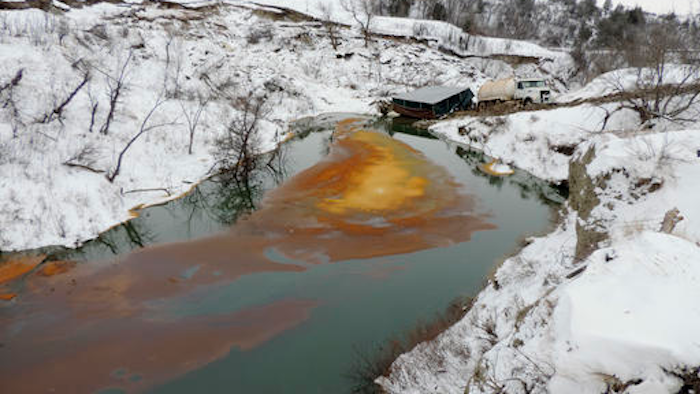 This Dec. 10, 2016, file photo, provided by the North Dakota Department of Health shows an oil spill from the Belle Fourche Pipeline that was discovered Dec. 5, 2016 in Ash Coulee Creek, a tributary of the Little Missouri River, near Belfield, N.D. President Barack Obama's administration has scaled back new safety measures for the sprawling network of fuel pipelines that crisscross the United States after complaints from industry over the potential cost.
Scott Stockdill/North Dakota Department of Health via AP, File

The long-delayed regulations cover almost 200,000 miles of pipelines that transport oil, gasoline and other hazardous liquids. They will be subject to review by Congress and the incoming administration of President-elect Donald Trump, who was highly critical on the campaign trail of regulations that hinder energy development.

If the changes stand, pipeline companies will be required to conduct more rigorous inspections of lines in rural areas and install leak detection systems that are meant to speed up emergency response times when accidents occur.

An earlier administration proposal for companies to immediately repair cracks and other problems in their lines was dropped, drawing criticism from safety advocates.

Documents show the pipeline repair criteria was altered to give companies more flexibility in when to do the work following a December 12 meeting of officials from the Transportation Department and White House with representatives of the oil industry.

The American Petroleum Institute complained that the administration's original proposal for repairs, unveiled in late 2015, was too stringent and would cost companies almost $3 billion over the next decade. The industry group argued the high price tag outweighed any benefits from accidents averted.

"Based on information no one else was privy to, they weakened the final rule," said Carl Weimer with the Pipeline Safety Trust, an advocacy group based in Bellingham, Washington. "We hope there's still enough to prevent more of the types of spills we've seen over the past four or five years."

The trust was formed after three children were killed when a gasoline pipeline broke in 1999, leaking fuel for 1½ hours before it exploded.

Thousands of pipeline accidents over the past decade caused $2.5 billion in damages nationwide and dumped almost 38 million gallons of fuels.

John Stoody with the Association of Oil Pipelines said it was important for companies to have enough flexibility in repairs that they can concentrate their work where spills could cause the most harm, such as in cities or beneath water bodies.

"We should put resources where we have the most impact on pipeline safety," Stoody said.

The new regulations go into effect in roughly six months, meaning the Trump administration could seek to block or modify them. Trump's transition team did not immediately respond to a request for comment.

Transportation Department spokeswoman Allie Aguilera said the government and industry were "on the same page on safety," suggesting there would be no need to overturn the rule.

The American Petroleum Institute issued a statement saying the rule was an improvement over the original proposal, yet retained provisions that would force companies to divert attention from areas of highest risk.

Lines outside those areas were not required to be inspected with mechanical devices known as "pipeline pigs," which travel inside the pipe looking for flaws. Friday's rule will require the use of pipeline pigs on large transmission pipelines that run beneath the land, but federal officials dropped their proposal to require the use of pigs offshore.