The problem is similar to the one being blamed in the death of Star Trek actor Anton Yelchin. 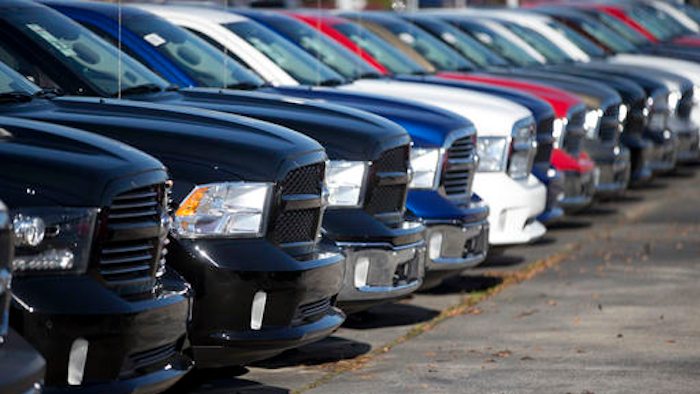 The U.S. auto safety agency has opened an investigation into complaints that another 1 million Fiat Chrysler vehicles can roll away after the owners shift transmissions into park, a problem similar to the one being blamed in the death of Star Trek actor Anton Yelchin. The investigation by the National Highway Traffic Safety Administration covers Fiat Chrysler’s top-selling vehicle, the Ram 1500 pickup from the 2013 to 2016 model years, as well as the 2014 to 2016 Dodge Durango.
AP Photo/John Bazemore, File

DETROIT (AP) — The U.S. auto safety agency has opened an investigation into complaints that another 1 million Fiat Chrysler vehicles can roll away after the owners shift transmissions into park, a problem similar to the one being blamed in the death of Star Trek actor Anton Yelchin.

The investigation by the National Highway Traffic Safety Administration covers Fiat Chrysler's top-selling vehicle, the Ram 1500 pickup, from the 2013 to 2016 model years, as well as the 2014 to 2016 Dodge Durango SUV. The rollaway complaints are similar those that prompted the recall of 1.1 million Jeep Grand Cherokees and other vehicles earlier this year, although those vehicles have different shifters.

Yelchin, 27, known for playing Chekov in the film series, died in June after his 2015 Jeep Grand Cherokee pinned him against a mailbox pillar and security fence at his home in Los Angeles. His Jeep was among the vehicles recalled in April because of complaints from drivers who had trouble telling if they put the console-mounted shift levers in "park" after stopping. Many reported that the vehicles rolled off after the driver exited. Los Angeles police are still investigating Yelchin's death.

In the new investigation, the government says Rams and Durangos have dial-like rotary knob shifters that are linked electronically to the transmission. The knobs are turned to the left or right and have detents that click into gear.

But the government said in documents posted Tuesday that it received 43 complaints alleging that the vehicles rolled away unexpectedly. Owners reported 25 crashes and nine injuries. Thirty-four of the owners alleged that the vehicles moved while the shifters were in park, and most said the engines were running.

"Notably, none of the reports indicate that the parking bake was engaged at the time of the rollaway incident," NHTSA said in the documents. Fiat Chrysler says it's cooperating with the investigation, and it joined NHTSA is urging drivers to always use parking brakes when they stop vehicles.

Both Fiat Chrysler shifters are different from conventional levers on the steering column or console. Most cars have console shifters that slide forward or backward to indicate the car's gear. They used to be tied to a cable that physically changed gears. But the auto industry has developed new transmissions with the gear selection controlled electronically.

The Grand Cherokee shift levers like Yelchin's had to be pushed forward or backward to change gears, confusing many drivers. In the recall, Fiat Chrysler changed the software so the vehicles automatically shift into park if the driver's door is opened.

In the latest investigation, no recall has been issued, but one is possible. NHTSA says it's investigating the scope of the problem and how often it happens.

An owner from Tarzana, California, complained to NHTSA that his 2014 Ram rolled into a wall with his grandmother still in the vehicle in July of 2014. The owner told the agency that he shifted the truck into park while it was in his driveway and stepped out, but the driver's door hit him in the back. The driver's side tire rolled over one ankle, knocked him down, then rolled over the other ankle. The truck then jumped a curb and hit the wall, the owner wrote. People who complain are not identified in the NHTSA database.

Two other Fiat Chrysler vehicles have the dial shifters including the Chrysler Pacifica minivan and the Chrysler 200 sedan. But FCA says those are not included in the investigation because they automatically shift into park if the driver's seat belt is unbuckled or the driver's door is opened.

Other automakers also use electronic rotary shifters, but the fact that they're different from conventional shifters seems to confuse drivers. NHTSA on Tuesday posted another investigation into a different automaker's shifters. This time the agency is probing complaints in about 39,000 Jaguar and Land Rover vehicles that also have rotary shift knobs.

In that probe, seven owners complained that the 2012 to 2014 Land Rover Evoque and Jaguar XF rolled away after the driver shifted into park. Four injuries were reported, most while the driver door was open when the vehicles rolled off.